Thursday, 24 February 2022
0
REM
With new technology, Göteborg Energi and Siemens Energy have successfully run a gas turbine in the Rya CHP plant with liquid biofuel instead of natural gas.This opens up new opportunities for the conversion of Rya KVV but also for sustainable power production nationally and globally. 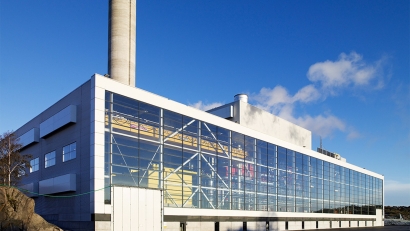 The project with renewable fuels has been ongoing since 2019 and has now resulted in a successful operational test with biodiesel. For two days, the plant was run on hydrogenated vegetable oil, or HVO, which is a diesel fuel based on renewable raw materials. This shows that both start-up of the plant and stable operation with a renewable fuel in a power plant such as Rya KVV is possible.

Rya KVV produces both district heating and electricity. The facility has an important role, not least in Gothenburg's electricity supply.

"Our goal is to, by 2025, provide district heating that comes entirely from renewable or recycled sources and the conversion of Rya KVV is an important part of that work. That we have now, together with Siemens Energy, been able to concretely demonstrate the possibilities with renewable fuels in gas turbines is extremely gratifying and important for our continued work," says Alf Engqvist, CEO of Göteborg Energi.

Hans Holmström, CEO of Siemens Energy states that the gas turbine technology that the company develops can be used both as base power and balancing power depending on the needs that exist.

"We can already burn renewable fuels such as biogas and high proportions of hydrogen in our gas turbines and the goal is to in the near future be able to offer several alternatives for running 100 percent renewable, including liquid fuels. Since many of our customers today have gas turbines that provide balancing power, and we see that this will increase in the future, liquid renewable fuels that require relatively little storage space are a good alternative.

"Through our successful collaboration in Rya KVV, we have shown the possibility that exists for the transition to sustainable fuels," he says.

The next phase of the project is to evaluate and take the lessons learned from the tests carried out in the continued development work on liquid biofuels in gas turbines with the aim of further expanding fuel flexibility. The project looks at, among other things, the biofuels produced at the refineries in Gothenburg, which would reduce the amount of transport for Rya KVV.

The project is part-financed by the Swedish Energy Agency.