Thursday, 10 March 2022
0
REM
Wabtec and BNSF Railway are partnering to advance sustainability in the rail industry with a new biofuel project aimed at quantifying the impact of alternative fuels on emissions, durability, and performance in Wabtec locomotives. 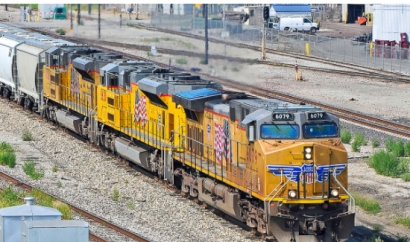 BNSF and Wabtec will begin testing biofuel in the second quarter of this year. The two companies will demonstrate the performance of biodiesel (B20) and renewable diesel (R55) in revenue service on Wabtec Tier 3 and Tier 4 Evolution Series locomotives in California. BNSF will operate the locomotives between Barstow and Los Angeles, California.

“BNSF is pleased to partner with Wabtec to test higher percentage blends of biodiesel and renewable diesel,” said John Lovenburg, Vice President, Environment & Sustainability. “Rail is already the most carbon-efficient mode of land freight transport, and the use of these lower carbon fuels is another means for BNSF to reduce its emissions and help meet its carbon reduction goal. Wabtec continues to be a good innovation partner for us – last year, we piloted the first battery-electric freight locomotive in North America.”

Wabtec already has approved a 5-percent biodiesel (B5) and 30 percent renewable diesel (R30) blend for its locomotive engines. There currently are approximately 11,000 Evolutions Series engines in operations today with railroads around the world.

The announcement comes after BNSF conducted a pilot last year with a battery-electric locomotive developed by Wabtec in commercial service between Barstow and Stockton that showed an 11% reduction in fuel consumption and greenhouse gas emissions compared with standard diesel units operated on the same route.