Wednesday, 02 November 2022
0
REM
Anaergia Inc. has received the Biogas Groundbreaker Award for 2022 from the European Biogas Association. The award recognizes the Company’s growth and dedication to research activities as well as its ambition to accelerate biogas production at scale in Europe and across the world. The award was presented at a ceremony in Brussels, Belgium last week. 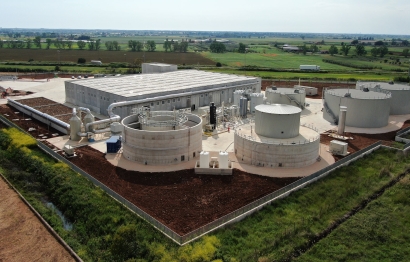 Anaergia has been rapidly growing its operations in Europe as part of its commitment to combatting climate change by producing renewable fuels at scale. The Company has created one of the continent’s largest organic waste-to-biomethane platforms and by 2023 will have completed the construction of six new facilities in Italy. These plants in Italy will process about 230,000 metric tons of organic waste each year and use it to produce pipeline-quality biomethane (renewable natural gas). This will translate to about 50,000 tCO2e of greenhouse gas (GHG) reductions per year.

The Company is also building the Tønder plant in Denmark. It is expected to produce 1.4 million MMBtu per year of biomethane, which would make it one of the world's largest anaerobic digestion facilities. In addition to producing biomethane, this plant will provide biogenic CO2 for the production of green ethanol as fuel for the world’s first container vessel operating on carbon-neutral fuel.

“We’re grateful that the European Biogas Association has recognized Anaergia’s passion for stopping climate change through the global-scale transformation of waste into renewable fuels,” said Andrew Benedek, Anaergia's Chairman and CEO. “Our dedication has led us to create a complete set of technologies that can convert any type of organic waste into biogas. So instead of allowing waste to cause climate change, we are using it to create a carbon-negative fuel that is helping the world reach net-zero.”

Founded in February 2009, the European Biogas Association (EBA) is committed to the deployment of sustainable biogas and biomethane production and use throughout the continent. EBA counts today on a well-established network of nearly 200 national organizations covering the whole biogas and biomethane value chain across Europe and beyond.