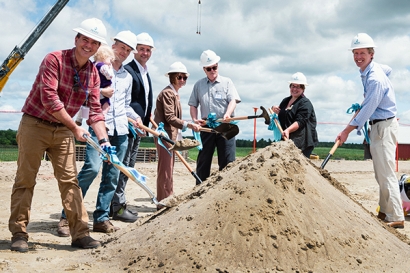 State officials and local leaders joined project partners, farmers, and friends of the project to witness the historic groundbreaking.

“It truly was an exciting day for Peaks, Summit, and the state of Maine,” said Kurt Adams, Summit’s President and CEO. “Since announcing our intent to build the anaerobic dairy digester, our teams have worked tirelessly to make it come to life. I am thrilled that we’ve been able to invest our resources to create green, renewable jobs right here in Maine and appreciative of the incredible support for the project we’ve received from the state, local community, and farming industry.”

“This groundbreaking is a historic step forward for Summit, Peaks and all of our project stakeholders,” said Angus King, President of Peaks and Chief Strategy Officer for Summit. “Renewable fuels like RNG have a critical role to play in reducing emissions and transitioning to a low carbon future. We created Peaks to drive innovation within Summit, and it has opened the door for the company to be a leader in the development of zero carbon fuels and drive innovation in the energy sector. For that, I am truly grateful.”

The project was first announced in 2019 by Summit, with the goal of supporting the local economy and family farms while also reducing emissions by creating home-grown renewable natural gas that can be used to warm homes and fuel industry. To develop the project, the company is working with six Maine-based, family-owned dairy farms to generate homegrown RNG.

Located at Flood Brothers’ farm in Clinton, the project will receive dairy manure from the Floods and from Gold Top Farm, Somerset Farm, Wright Place Farm, Taylor Dairy Farm, Heifer Haven Farm, and other farms. Once in the digester, the manure will be heated and decomposed, creating biogas. The gas will then be cleaned to make it pipeline quality.

Renewable energy credits will be sold to third parties who need them for their own decarbonization requirements. The gas itself will be purchased by Peaks’ affiliate company, Summit Natural Gas of Maine (SNGME), and used to provide reliable gas service to its thousands of customers throughout the state. To put the project into perspective, it will produce the equivalent of about 45 percent of SNGME’s residential demand.

Carbon beneficial RNG is functionally identical to traditional natural gas and can be used for heating, cooking, and other processes.

Peaks estimates that the facility will avoid emissions equating to 28,000 metric tons of carbon dioxide equivalent. That’s the equivalent of taking 6,500 cars off the road for every year it operates. In addition to generating pipeline-quality, carbon-negative renewable natural gas, the facility will also produce animal bedding and fertilizer that will be returned to the local dairy farms participating in the project to use in their daily operations. This unique manure-only project is first of its kind in Maine and joins a number of projects across the country that are already using this technology to remove emissions and create RNG.

“With Peaks Renewables’ RNG project, we have an energy company teaming up with Maine’s dairy industry to create a clean energy source our state can be proud of. This facility will help dairy farmers achieve greater efficiency and will deliver clean energy to homes and businesses in Maine, further proof that rural Maine can be a leader when it comes to energy innovation,” said Rep. Jared Golden (ME-02)

RNG, also known as biomethane, is derived from the decomposition of naturally occurring organic waste from landfills, waste treatment plants, industrial sites and farms. Unless captured and reused, much of the emissions created from the organic waste at these facilities would be released into the atmosphere in the form of methane – one of the most potent greenhouse gasses.