Tuesday, 10 March 2020
0
REM
The ancient town of Slonim in western Belarus, home to almost 50,000 people, has become one of the first municipalities in the country to receive state-of-the-art biogas facilities financed by the European Bank for Reconstruction and Development (EBRD} which will help achieve significant energy savings. 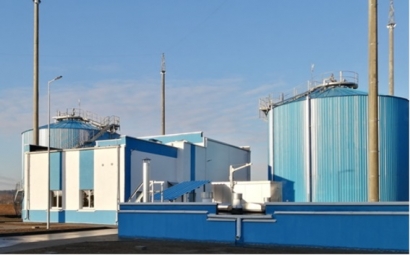 Slonim, selected among several Belarusian municipalities for the implementation of energy efficient and environmentally friendly water and wastewater improvements, has now received two biogas co-generation units with an installed capacity of 136 kWt each. Financed with a €2.85 million EBRD loan, the units will produce around 2 GWh of clean energy annually and satisfy around 70 per cent of the energy consumption needs of Slonim’s wastewater treatment plant.

The launch of the biogas facilities took place recently.  An official ceremony was attended by the Chairman of the Slonim rayon Council of deputies Oleg Targonsky, the first secretary of the Embassy of Sweden to Belarus Gunilla Davidsson and EBRD Head of Belarus Alexander Pivovarsky.

The investment was supported by grant funding from the government of Sweden and benefited from financial contributions from Austria and Finland.

The amount of energy annually generated by the new biogas facilities will be enough to provide street lighting for a municipality much larger than Slonim or fully cover the energy needs of 1120 average Belarusian households.

The benchmark project is expected to pave the way for similar energy efficient solutions in other Belarusian municipalities and help adopt better wastewater sludge treatment practices, which may be eventually processed into fertilisers.

Since the start of its operations in Belarus in 1992, the EBRD has invested almost €2.9 billion in 130 projects in various sectors of the country's economy.