Friday, 11 December 2020
1
REM
Gasum has received a grant of €30 million from the Swedish Environmental Protection Agency’s Klimatklivet  (Climate Leap) investment program to build two new biogas plants in Sweden. Each plant received a funding of €15 million, which is the maximum an initiative can receive. The planned plants are to be located in Borlänge, Dalarna County, and Kalmar County. 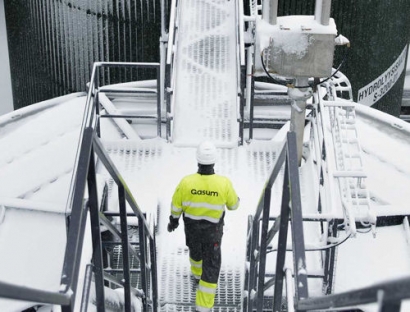 “The grant from Klimatklivet makes it possible for us to consider expanding our production capacity in Sweden with not just one, but two plants. This is an important step in making biogas more available and thus helping us play our part in realizing Sweden’s and EU’s climate goals,” says Erik Woode Director, Project Development & Management, Gasum

The plant planned in Borlänge will produce liquified biogas (LBG) mainly from manure and food waste slurry. Its annual capacity will be 120 GWh. The plant’s location is convenient as Gasum is also constructing a new LBG filling station for heavy duty vehicles in Borlänge.

The plant also allows Gasum to use local feedstock for biogas production. The municipal energy and waste management company Aktiebolaget Borlänge Energi has operated a pre-treatment plant for food waste since 2017. Currently the slurry produced by the company is being transported out of Borlänge. Establishing a biogas plant near Borlänge Energi’s pre-treatment plant at Fågelmyra landfill and recycling centre allows around 47,000 tons of slurry to be pumped directly to the biogas plant.

“Gasum will also partner with Dala Biogas AB, which is a biogas company founded by a group of local farmers. Dala Biogas has been aiming at establishing a biogas plant in Borlänge for years. They will be a valuable local asset for us. There is a tremendous spirit of co-operation, commitment, and a can-do attitude in Borlänge. They all really want this to happen,” Woode adds.

Local energy production and new jobs in Kalmar and Dalarna

The biogas project in Kalmar County was established in co-operation with Mörbylånga Biogas AB, a company that was started by a group of local farmers. Through local co-operation, the plant has earned a strong support from local officials.

As the project has begun from an initiative by local farmers, it is natural that the feedstock for the plant will consist mainly of manure and other agricultural rest products. The plant’s annual capacity will be 70 GWh.