Wednesday, 05 December 2012
3
Robin Whitlock
European biogas market will grow in countries such as the UK, Italy and France, but the German market has slumped in comparison 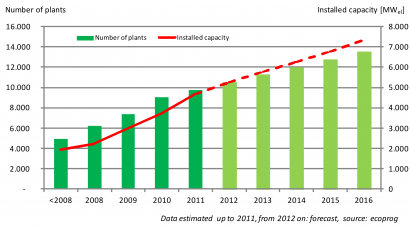 A new study by the independent energy consultancy Ecoprog GmbH predicts that the main growth in biogas will occur in European countries such as Italy, the UK and France with capacity increasing from around 4,700 MWel to around 7,400 MWel between 2012 and 2016. However, the German market has slumped dramatically since early 2012 forcing the German biogas industry to internationalise its business strategies.

Almost two-thirds of the world’s operational biogas plants, currently numbering more than 10,000, are located in Germany. Worldwide installed capacity is expected to increase by 2,700 MWel from 2012 until 2016 with the number of plants increasing by another 3,800, however much of the growth will shift away from Germany where most of the growth in the market has occurred over the last five years or so. The German share of the market is expected to decrease to about a third while new strong markets will appear elsewhere in Europe and in Asia and North America.

The most important biogas markets over the next five years will be those already established in Italy, the UK, the Czech Republic and the Netherlands, largely due to their favourable subsidisation schemes. France, which introduced a Feed-in Tariff system in 2011 alongside simplified approval procedures for new biogas plants, is one of the new strong growth European markets and further markets are emerging in Eastern European countries. Poland, for example, has announced the introduction of a Feed-in Tariff in early 2013.

The most important non-European markets in the years to come will be in North America and Asia, particularly the USA, Canada, China, India and Japan. Growth in the USA is expected to accelerate given that the country’s current project pipeline is one of the largest in the world. India and China are expected to raise their standards to western levels in the very near future and these countries will significantly develop their markets due to their huge biomass potentials. Japan has meanwhile introduced the world’s highest Feed-in Tariff for biogas, in mid-2012.

The German slump is mainly due to the amended Renewable Energy Act in which compensation rates for biogas were reduced significantly with an added tightening of legal conditions. German plants now have to use at least 60 percent of their waste heat and as a consequence the number of plants constructed per year in the country will decrease from around 1,300 in 2011 to 300 in 2012.  Eventually the German market will stabilise at a level of 200 MWel but the decline will force German manufacturers to expand abroad. Many of them already generate over half their turnover abroad.

Tags: Europe ,Feed-in tariff ,France ,China ,Germany ,India ,Japan ,Biomass ,Canada ,Renewable energy ,Waste ,Biogás
Add a comment
ff
Nice to read your article! I am looking forward to sharing your adventures and experiences. buypacwoods strawanana
ff
Excellent website! I adore how it is easy on my eyes it is. I am questioning how I might be notified whenever a new post has been made. Looking for more new updates. Have a great day! Lifeguard courses near me
ff
Positive site, where did u come up with the information on this posting?I have read a few of the articles on your website now, and I really your style. Thanks a million and please keep up the effective work. Increase Alexa Ranking
storage