Monday, 19 November 2018
0
REM
Dr. Fatih Birol, the Executive Director of the International Energy Agency, highlighted the possible opportunities of hydrogen during a visit to the Netherlands, where he met with Eric Wiebes, the Dutch Minister of Economic Affairs and Climate Policy. 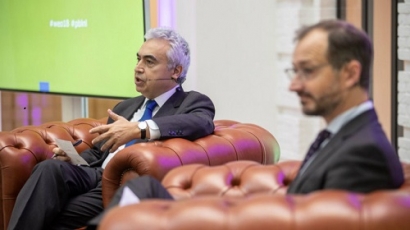 Dr. Birol was in the Hague on November 15th  to present the findings of the latest World Energy Outlook, the IEA’s flagship publication, which was released last week. He attended a conference with Minister Wiebes and hosted by the Dutch government think tank on energy and climate policy, which was attended by some 300 participants from government, industry, NGOs and think tanks.

Dr. Birol outlined the case for hydrogen, which according to the IEA has the potential to support clean energy transitions, diversify the fuel mix, and address energy security concerns. He noted that hydrogen deployment has technological and economic challenges but that the global momentum was growing. At the request of the Japanese government, the IEA will release a major report next year on the state of play of hydrogen, its economics, and future potential, for the G-20 that will take place in Japan in 2019.

Following Dr. Birol’s presentation, Minister Wiebes thanked the IEA for stressing the urgency of reducing emissions, showing pathways on getting there, and for underlying that all energy sources should be part of that future. Minister Wiebes also showed great interest in hydrogen as a storage fuel, a possible replacement for natural gas that can benefit from the existing infrastructure, and as feedstock for industry.