Wednesday, 15 July 2020
0
REM
Construction work has started for the new OWS DRANCO (DRy ANaerobic COmposting) plant in Japan (Yorii) ánd three more DRANCO digesters are being planned; one in China (Chongqing) and two in Belgium (Dendermonde & Leuven). When these plants are commissioned, the total installed digestion capacity by DRANCO for household waste organics will have reached over 1 million tons per year. 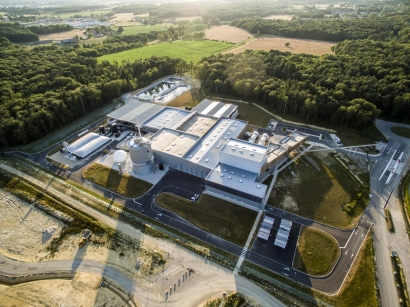 The DRANCO plant in Japan will process 27,000 tons per year of food and paper waste for ORIX Environmental Resources Management Corporation. The facility will process up to 100 tons per day of food and paper waste. OERM decided to implement a dry digestion technology, in order to be able toaccept more waste containing impurities and avoid problems with flotation and sedimentation. Ku rita Water Industries, the DRANCO license partner of OWS for the Japanese market, will construct this installation in cooperation with OWS. The plant wills tart to produce biogas in autumn 2021.

In China, the plant will process 35,000 tons per year of kitchen waste. The Chinese megacity Chongqing wants to be top of the class in sustainable waste processing. There is already a digestion plant up and running in Chongqing and recently Chongqing Sanitation Group Co. Ltd.ordered two more digestion facilities. One of these new facilities was awarded to OWS. Purac Environmental System, DRANCO license partner of OWS for this project, will construct this installation in cooperation with OWS.

One of the new DRANCO plants in Belgium will process 30,000 tons per year of food and garden waste. In the beginning of 2020, the inter-municipal association ‘VERKO’ awarded a contract to OWS to construct a DRANCO digester on its site, bringing the number of DRANCO plants in Belgium to five. The existing composting plant will be redesigned with a new reception hall, pretreatment, anaerobic digestion with a DRANCO digester of 2865 m³, modernization of the existing tunnel composting, biofilter, biogas engines and a biogas upgrading for a part of the biogas.

The second new DRANCO plant in Belgium will process 50,000 tons per year of food and garden waste. In June 2020, the general assembly of the inter-municipal association ‘ECOWERF’ also decided to build a DRANCO digester on its site. The site in Leuven disposes of an existing pre-treatment and composting facility for about 50.000 tons per year of source separated organics. The pretreatment has lasted 20 years and will be renewed. After this, the whole site will be upgraded with a DRANCO digester. The startup is scheduled for spring 2023 and will bring the total number of DRANCO digesters in Belgium to six.

“Projects in Belgium are of vital importance to OWS as a showcase close to the main office. But the new projects in China and Japan are both very important for the geographic expansion of OWS. China and Japan are promising but at the same time very demanding and difficult to access markets. We had to jump through some hoops but we feel that these projects might be the snowball that creates the avalanche of change in that region."

Besides Europe and Asia, the company is also focusing a lot on the US. “It is the objective of OWS to become a leading player on the US-market in the next years, just as it is the case in Europe,” says Smis.

The DRANCO technology is very robust and extremely suitable for organic material with high levels of impurities and therefore the DRANCO technology really stands out above the competition in these mixed waste projects. In combination with SORDISEP as a post-digestion technology to ‘wash the digestate’, a clean compost -similar in quality as compost from source separate collection- can be produced out of this (dirty) mixed or residual waste and high diversion rates can be obtained.

In Bourg-en-Bresse (France), biogas and clean compost are being produced from (mixed) residual waste in a full-scale plant since 2016.