Tuesday, 29 May 2018
0
REM
On May 9th, just a little over two years after the project's initial groundbreaking, ZooShare and Canada's Toronto Zoo celebrated delivery of the engine for a biogas plant that will generate electricity from zoo poo and food waste. 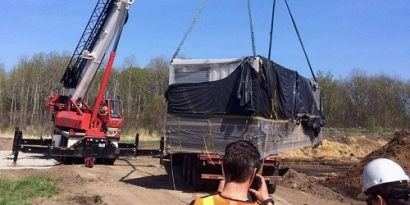 ZooShare’s Executive Director, Daniel Bida, was there to meet the delivery of the generator.  “It was an exciting moment.  The CHP is an essential piece of our project, and as the first piece of equipment to arrive, it is the first step towards construction,” he said.

The combined heat and power (CHP), also known as cogeneration, is the simultaneous production of electrical power and heat.  First, biogas powers the engine, then the engine runs an alternator which creates renewable power. The rotation of the alternator also produces heat–and unlike conventional technologies that waste it by letting it float off into the atmosphere–the efficient CHP unit will capture that heat and use it to warm the ZooShare tanks and buildings on site.

The next steps are to connect the CHP unit to the Ontario grid, and then construct the tanks and buildings that make up the rest of the biogas plant.