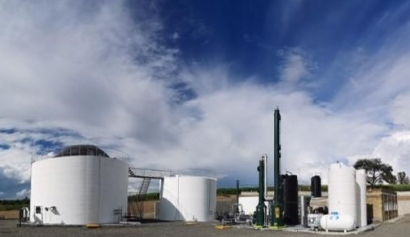 “We founded Ductor because we were worried about global challenges around hunger and the food supply of the future. We wanted to find solutions to make farming ecological again and to contribute to providing all people with nourishment that is adequate, rich in nutrients, and safe. Now we have turned that vision into action for the first time with the new facility in Mexico,” said Ari Ketola, the Co-Founder and CEO of Ductor.

Since patenting its system in 2015, Ductor has completed development and commercialization of its groundbreaking innovation for international deployment. The fermentation technology converts chicken manure into efficient organic fertilizer useful to large-scale farming and biogas in the form of biomethane to replace fossil fuel energy.

During the last 40 years, over 30 percent of the world’s arable land has become unproductive. Topsoil is being lost from land areas at a rate 10 to 40 times faster than soil renewal. This imperils future human food security and environmental quality. Ductor’s products slow down this degradation and return farming grounds to a healthy, productive state. Healthier soils and ecological farming also contribute to less polluted waters.

“We try to help nature do its own job better by making use of natural waste and putting it back to work as carbon-negative fertilizers and renewable energy,” Ketola said.

Ductor has now several similar projects underway in the Americas and Europe.