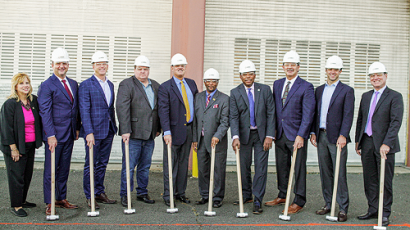 In lieu of the traditional shovels, the crowd picked up sledge hammers and began the demolition at the building that will house the plant. More than 100 gathered to usher in the facility that will be located within the Linden Roselle Sewerage Authority (LRSA) complex, 20 miles from New York City. Sixty new construction jobs will be seen during the construction phase of this project and 16 long-term, skilled jobs are anticipated to operate the plant.

“This day culminates the years of research and hard work from the Aries Team. It signals further validation of our patented gasification technology,” said Gregory Bafalis, CEO of Aries Clean Energy. “This Aries system eliminates the need for environmentally harmful landfilling or incineration of biosolids, while producing beneficial renewable energy and biochar. We believe this truly is a beneficial and disruptive technology that will revolutionize the wastewater treatment industry and establish itself as the best available control technology for biosolids disposal and serve as a model for others.”

Aries will deploy its patented fluidized bed gasification system that was designed specifically for processing biosolids. The system will reduce the volume of biosolids from 430 tons per day to 22 tons of biochar. The biochar will be used as a substitute for fly ash in concrete. The renewable energy that is generated from the system is then recovered and used within the system, so no fossil fuels are used during normal operations. It will also reduce greenhouse gases due to the reduction in trucking miles associated with conventional disposal methods as well as the elimination of methane generated from land application of biosolids.

“This marks the beginning of a collaboration that will set new standards of clean and green efforts in the wastewater industry,” said David Brown, executive director of LRSA. “The opening of this gasification plant here will provide additional revenue, reductions in operation and maintenance costs, and give our ratepayers an economic benefit that will allow the Authority and the City to stabilize our budgets.”

LRSA, created in 1948, services the City of Linden and the Borough of Roselle. It was established to contract and operate wastewater treatment and interceptor facilities to collect, treat, and dispose of sewage generated by the municipalities.