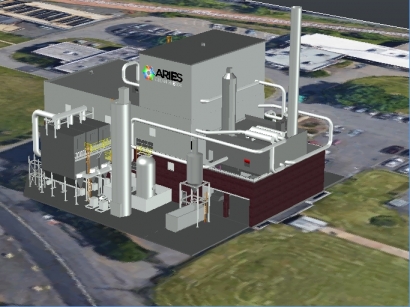 The Aries Linden Biosolids Gasification Facility will be located in a re-purposed building within the Linden Roselle Sewerage Authority (LRSA) complex, 20 miles from New York City. Aries will deploy its patented fluidized bed gasification system that was designed specifically for processing biosolids. The system will reduce the volume of biosolids from 400 tons per day to 22 tons of beneficial biochar. The biochar will be used as a substitute for fly ash in concrete. The renewable energy that is generated from the system is then recovered and used within the system, so no fossil fuels are used during normal operations. It will also reduce greenhouse gases due to the reduction in trucking miles associated with conventional disposal methods as well as the elimination of methane generated from land application of biosolids.

“The awarding of these permits further validates Aries patented technologies will bring clean and renewable solutions not only to the Garden State, but worldwide,” Bafalis added.

Mayor Derek Armstead, mayor of Linden, New Jersey added,“This is not only a first for Linden, but it will be the largest facility of its type in the world.”

LRSA, created in 1948, services the City of Linden and the Borough of Roselle. It was established to contract and operate wastewater treatment and interceptor facilities to collect, treat, and dispose of sewage generated by the municipalities.