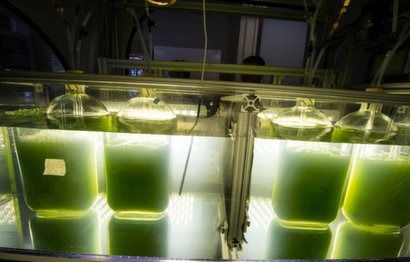 The Government of Canada has been supporting clean energy research, development and technology demonstration at all stages of the innovation spectrum, from high-risk, early stage research that can deliver transformative energy solutions, to later stage technology demonstrations to help speed the commercialisation and adoption of cleaner energy technologies.

The project uses a 25,000 L photobioreactor within a pilot scale algal biorefinery to recycle carbon dioxide and other airborne industrial pollutants into algal biomass that can be further converted into sustainable products, including renewable biofuels and biomaterials. The process being deployed by NRC experts and its partners is designed to rapidly recycle carbon dioxide (CO2) and other airborne industrial emissions into biomass through photosynthesis.

As part of Canada’s commitment to the 21st Conference of the Parties to the United Nations Framework Convention on Climate Change (COP21), the Government of Canada joined a global effort to accelerate clean energy innovation, Mission Innovation, in November 2015 and committed to double funding for clean energy and clean technology research and development by 2020.

These collaborative efforts are to reduce greenhouse gas emissions through biological conversion into algal biomass, renewable biofuels, and other value-added bio-products. As the world transitions to a low-carbon economy, strategic investments in clean energy and emission-reducing research and development will play an increasingly important role in supporting Canada’s economic growth, while also meeting its climate change objectives and protecting the environment.

“With the assistance of NRC’s Algal Carbon Conversion programme, this technology’s tremendous potential will be unleashed in real-world applications to benefit our environment and our economy” said Dr. Roman Szumski, Vice President, Life Sciences, National Research Council of Canada.