Tuesday, 14 May 2013
0
Robin Whitlock
The world’s first building shaded and heated by algae biomass has been officially opened in Hamburg’s Wilhelmsburg Central, district in Germany 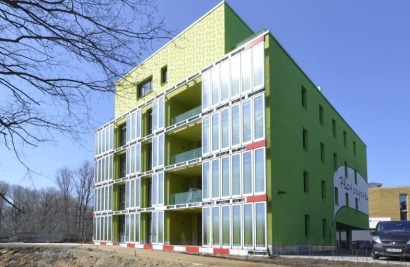 The German company IBA Hamburg has opened the world’s first building run on algae biomass. The International Building Exhibition IBA Hamburg 2013 BIQ project, better known as the Algae Building, is now ready with the first façade elements installed and all trial runs successfully completed. The launch event, held on the 24th April, saw the most spectacular event in Wilhelmsburg Central in which the building’s green microalgae flowed into its glass facades.

The BIQ (Bio Intelligent Quotient) is a cubic, five-storey Passive House with façades in two different designs. The building, with 15 residential units, is the result of an IBA architectural competition, which was won by a design by the SPLITTERWERK team from Graz. The buildings technical design and bioreactor façade were jointly implemented by Arup Deutschland GmbH, Bollinger und Grohmann, and Immosolar.

The opening ceremony was formally conducted by IBA Hamburg and the investors Otto Wulff Bauunternehmung and SSC Strategic Science Consult. The experimental, cutting-edge project reveals how residential construction can also be green architecture in a literal sense. The BIQ is the first building in the world to have a bioreactor façade as part of an integrated renewable energy concept.

“Following the Hybrid House , we are now opening the second experimental building as part of the IBA Hamburg  the  BIQ” said  Stefan Wulff, Managing Director of Otto Wulff Bauunternehmungen. “This underlines the facts that we stand for innovative building and believe in the future viability of Wilhelmsburg as a residential location.”

The microalgae are cultivated in panelled, water-filled, glass elements that generate biomass and heat. The building is one of the Smart Material House model projects forming part of IBA Hamburg’s Building Exhibition which demonstrate new and intelligent construction materials used in buildings and façades.

“The microalgae give the building its own unique energy and aesthetic look, help to keep the apartments within the building shaded and supply heating and biomass that can be recycled” said the Director of IBA, Uli Hellweg.  “The project sends out an important message for construction in times of climate change.”

On the south-west and south-east sides of the building the façade has a second outer shell positioned in front of it which is the bioreactor façade. It is here that the microalgae are cultivated for the purposes of generating energy and for light control and the provision of shade for the block. The continuous growth of the algae and the rising gas bubbles mean that the façade is in constant flux, changing colour all the time. The sun’s radiation also generates thermal energy in the building’s water-filled glass elements. The algae used this sunlight to create biomass through photosynthesis and the heat is provided to the building through a heat exchanger. The biomass is used for energy purposes elsewhere.

“The bioreactor façade can only begin to operate when the algae are introduced, at which point it can be valued in terms of performance and visual appeal” said Dr Martin Kerner, Managing Director of SSC Strategic Science Consult. “In contrast to the algae façades facing southwards, the north-west and north-east sides have a luminous, bright green plaster façade. Spacious balconies overlooking the future Island Park and IBA Hamburg building provide all 15 rented apartments with high-quality access to the open air. Future residents there  families with children or couples will be able to experience the bioreactor façade at close quarters.”

A total of four model residences have been built on the edge of the park site in Wilhelmsburg Central for the International Garden Show in 2013. The intention is that they should be objects for discussion and observation long after they have been completed, establishing a new building typology in the process. The three companies involved in the project, SSC GmbH, Arup Deutschland GmbH, and Colt International GmbH, have been working on this joint project since November 2010. The project was funded by the Building The Future research initiative of the German Federal Ministry of Transport, Building and Urban Development (BMVBS). Its purpose was to create a façade system that would make it possible to control the use of the bioreactor façade on the building. The result was the development of a fully operational reactor that can be installed as a façade element.