Thursday, 03 May 2012
0
REM
Ecofys has started a trial to cultivate seaweed on offshore wind farms which could then be used to produce biofuels. It has developed a cultivation module, which was towed out of the NIOZ harbour on the Dutch island of Texel to a disused sand extraction area 10 kilometres west of the island in March. By late June, Ecofys hopes to harvest the first supply of Dutch seaweed for the production of biofuels, fish and animal feed, and energy. 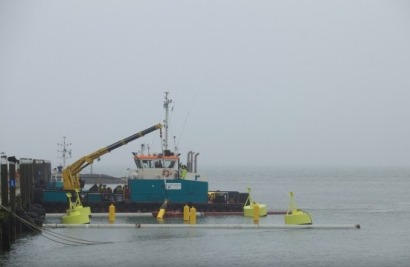 The innovative seaweed cultivation module, which measures 20 by 20 metres, consists of a set of steel cables, held two metres under the sea surface by anchors and floating buoys. Horizontal nets measuring 10 by 10 metres are suspended between the cables. Seaweed plants of species that occur naturally in the North Sea are attached to the nets. The trial will test if the module is ‘North Sea proof’, the survival and growth rate of the plants, and the ecological effects. When the trial succeeds, Ecofys will have reached a global milestone: offshore cultivation of biomass (bio-offshore).

The trial will also show whether the module is ‘position accurate’ and therefore suitable for seaweed cultivation in offshore wind farms. This is because seaweed and wind turbines are potentially a good combination. “A wind farm is closed for shipping and commercial fishing,” says Anouk Florentinus, project manager at Ecofys. “This makes it a kind of marine conservation area. Fish will be attracted to the seaweed fields and use them for shelter and even as a nursery.” This will certainly be the case in fields of several hectares.

In addition, the seaweed provides nutrients and energy. Ecofys’ partner, the Energy Research Centre of the Netherlands (ECN), is investigating the possibilities of ‘bio-refining’ seaweed into proteins, components for biofuels and fuel for energy generation. For example, the Irish company Ocean Fuel is already extracting seaweed proteins for fish and livestock feed. In this scenario, large-scale seaweed production at sea can replace large land areas of soybean production. The combination of sustainable food and energy production supports the idea of a ‘biobased economy’ that Ecofys promotes. “These are offshore renewables in the broadest sense,” says Florentinus.

“We expect to harvest and hopefully deliver the first kilos of seaweed in late June,” says Florentinus. Ecofys intends to organise a big ‘harvest festival’ at the same time, to celebrate the results of the trial and to discuss the next steps. These steps also depend on more funding. Ecofys is committed to developing this new green resource. With this intention, the company has created the North Sea Farm foundation in which a seaweed grower like Hortimare is one of the participants.

[Inset: The offshore biomass cultivation module takes to the water in the Netherlands. Courtesy of Ecofys.]