Tuesday, 13 September 2011
0
Toby Price
Electricity generation from incinerating biomass is increasing throughout the world. Over the past five years, almost 800 power plants with a capacity of more than 8,700 MWel came on line. In Europe alone, there are more than 1,000 active biomass power plants. In the five years to come, a worldwide growth of up to 12,000 MWel can be expected. 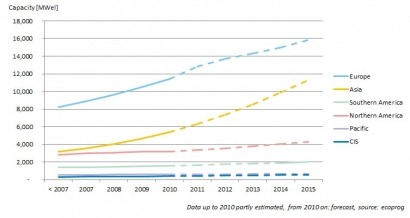 In the light of this development, ecoprog and Fraunhofer UMSICHT have analysed the global market for biomass power plants in detail.Their study entitled “Biomass to Energy – The World market for Biomass Power Plants” provides an up-to-date analysis of figures, facts, estimations and trends in the worldwide operator and plant market of electricity generation from biomass.

According to the study, mono-incinerating biomass is experiencing a boom like never before. At present, almost 2,000 biomass power plants with a capacity of 22.5 GWel are operational in more than 40 countries throughout the world. There are more than 1,000 active biomass plants in Europe alone.

Almost 800 power plants with a capacity of more than 8,700 MWel were commissioned in the past five years, while another 9,000 plants are supposed to be constructed by 2015. Investments in new construction and maintenance will increase from currently 12.2 to 15.5 billion euros annually.

“The market driver for this increase is the global development of renewable energies. Biomass is, in contrast to water, wind and sun, the only renewable energy source that does not depend on the weather and guarantees a continuous energy generation,” say the authors of the study, who forecast that “the increasing number of feed-in tariffs in many countries throughout the world will stimulate electricity generation from biomass in the years to come”.

Almost all of these promotion schemes are financed by the electricity customers, which makes them comparatively independent from national budgets and thus from the financial crisis. Price increases of fossil energy fuels and the introduction of carbon dioxide certificates also increase the competitiveness of electricity from biomass.

Still, biomass is most extensively used in Europe, especially – due to their large amounts of woods – in the Scandinavian countries Finland and Sweden. In Germany, there are – due to the long-term and intensive subsidisation – many, although on average very small plants. Outside of Europe, most of the power plants are located in Brazil, China and India. China and India subsidise electricity from biomass; in Brazil, about 400 ethanol factories use their own bagasse also for electricity generation. Only few biomass power plants exist in the USA and Canada, however, they are large.

In terms of plants and capacities, the trend is expected to change, with Asia superseding Europe over the next five years as the worldwide leading market. In monetary terms, however, Europe remains in the lead. This is because European biomass power plants and biomass heating power plants respectively are comparatively large, as they use the generated heat to a large extent. Plants in China or India are often designed for electricity generation only.

Biomass to Energy – The World market for Biomass Power Plants