Thursday, 17 June 2021
0
Robin Whitlock
A new ‘try before you buy’ scheme by Kent County Council, called Kent Realising Electric Vans Scheme (REVS), has been launched in partnership with Highways England, based on 20 all-electric Renault Kangoo E-Tech and four Renault Zoe Vans which are available for local businesses for a free trial of up to two months. 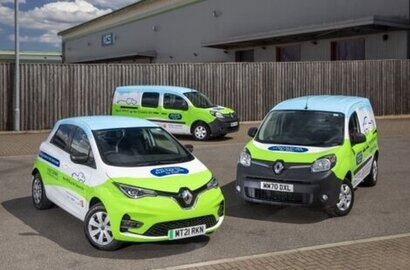 The scheme will provide Kent and Medway businesses with an insight into making the transition from a conventional ICE-powered commercial vehicle to an all-electric version. It is being operated by Commercial Services Kent Ltd (CSKL), with the ultimate aim of reducing carbon emissions and air pollution across the Kent road network and to accelerate the adoption of electric vehicles throughout the region. Notably, and in line with the goal of this year’s Clean Air Day to highlight the impact of air pollution on the health of children, the introduction of the scheme’s electric vans with zero tailpipe emissions will help to reduce roadside pollution that youngsters can be particularly susceptible to.

The rationale of Kent REVS is that more businesses will be more likely to convert their fleets to electric if they have an opportunity to try the vehicles for an extended period, before committing to a purchase or long-term lease.

The zero-emissions-in-use Renault vans are the first vehicles available via the project, with Kent County Council choosing them due to their impressive range and usability.

Highways England has provided £1.5 million funding for the two-year initiative, with the eventual aim that Kent REVS will have a fleet of 48 EVs available for trial. As part of the funding, and to aid with the efficient charging of the new Renault vans, CSKL has installed new charge points at its operating bases in New Hythe and Kings Hill, with a further 10 rapid chargers planned for other publicly accessible locations across the County. The installation complements Kent County Council’s plans to increase the number of EV charging points for businesses and the public across the county.

The new Renault vans feature a bespoke Kent REVS livery that highlights their 100 per cent electric power, with Kent County Council complementing the standard Business specification of the Renault Kangoo E-Tech with the additions of satellite navigation and ply lining in the load area. With fully automatic transmission and instantaneous torque the vans are ideal for use in Kent’s busy urban areas, providing Kent REVS participants with a drive that is also relaxing as well as environmentally compatible.

The launch of Kent REVS follows the successful implementation of a similar scheme by Leeds City Council in 2020, which was also funded by Highways England and features 20 Renault Kangoo E-Tech vans. Kent REVS also supports Kent County Council’s drive for net-zero emissions for its estate and operations by 2030. Together with investment in renewable energy and smarter working practices, core to achieving its target is a shift to electric fleet vehicles.

“Making the transition to electric vehicles can seem a big step for businesses and Kent REVS provides a risk-free way for them to experience the many benefits over a significant period” said Tony Hills, Cabinet Member for Environment at Kent County Council. “The Renault Kangoo E-Tech and Renault Zoe Van were identified as the ideal electric vans to include in the launch of Kent REVS with their ease-of-use ensuring that all types of drivers can quickly get used to the driving and charging experience of an electric vehicle, whilst also being suitable for a wide range of businesses.”

Vincent Tourette, Managing Director, Renault UK, reflecting on Kent County Council’s decision to choose Renault electric vans, added that they will play a part in helping Kent County Council achieve a greener, cleaner transport infrastructure throughout the region and that their  adoption by the scheme reinforces how easy they are  to drive and how they epitomise all the benefits there are to switching from a van that is powered by a conventional diesel or petrol engine to one that is pure electric, all without having any impact on the operational effectiveness of a business.

The Renault Kangoo E-Tech has a potential range of up to 143 miles (WLTP) and can be charged to 100 per cent in six hours when using a 7kW wallbox. It is priced from £23,000, excluding VAT, after the Plug-in Van Grant.

The Zoe Van is based on the multi award-winning Zoe electric passenger car, which won the ‘Best Small Electric Car’ category in the 2020 What Car? Awards and which has been honoured at the annual What Car? ceremony for the last seven years. The commercial version is already an award-winner, having recently won the compact van ‘Best Value for Ownership Costs’ category in the new What Car? Van Awards.

Combining the same advanced specification of the Zoe with a load volume of one cubic metre and a maximum payload of up to 457kg excluding the driver (Business specification), the Zoe Van is available in two trim levels – Business and Business+. It offers a WLTP combined range of up to 245 miles on a single charge on Business models and via the 50kW DC charging option can be charged from zero to 80 per cent in just one hour and ten minutes.