BMW proceeds with electrification of its portfolio

Wednesday, 06 March 2019
0
Robin Whitlock
Automobile manufacturer BMW is moving ahead with the electrification of its drive portfolio and is now presenting its latest plug-in hybrid models at the 2019 Geneva Motor Show as well as announcing the market launch of a new electric SAV. 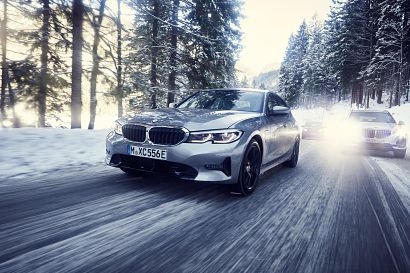 The globally popular BMW X3 will also be produced in a plug-in hybrid variant from December 2019, making it the first model of the brand to be offered with both a conventional combustion engine and a plug-in hybrid system – with the addition of a purely electrically powered version in 2020.

With a market share of more than 9 percent, the company currently leads the worldwide ranking of established premium providers of vehicles that are purely electrically powered or run on plug-in hybrid systems. In 2018, the BMW Group was the market leader in the premium segment of electrified vehicles in both Germany and in China. With a share of more than 16 per cent, the company also once again led the overall European market for electrified vehicles. BMW Group achieved a new worldwide sales record in 2018 with more than 140000 units of electrical and plug-in hybrid vehicles sold – an increase of 38.4 per cent over the previous year. As one of the four future- oriented ACES topic areas (Autonomous, Connected, Electrified and Services/Shared), electromobility is one of the key elements of the company’s NUMBER ONE > NEXT strategy. The aim of the BMW Group is to have put more than half a million electrified vehicles of its brands on the road by the end of 2019.

The latest BMW plug-in hybrid model is fitted with a lithium-ion battery which is positioned under the rear seat in order to save space. With a luggage volume of 450 litres, the transport capacity of the BMW X3 xDrive30e is at the level of those model variants which are fitted with a conventional engine.