Dott launches e-scooters on the streets of London

Thursday, 10 June 2021
0
Robin Whitlock
European micro-mobility company Dott is launching its e-scooters on the streets of London this week, after being chosen as one of only three companies authorised to operate e-scooters in the city. 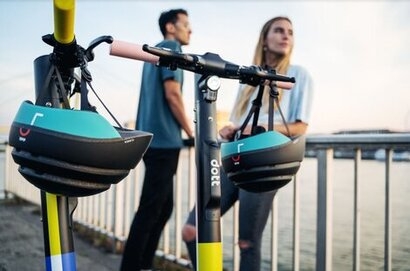 The company currently operates over 30,000 e-scooters in 17 cities, across Belgium, France, Germany, Spain, Italy & Poland and will be launching up to 6,600 scooters in London over the next 12 months.

Electric scooters, which have previously been illegal to own and operate outside of private land in the city, will now be fully integrated into the public transport network, and surveyed as part of a twelve month trial spearheaded by TfL and London Councils. The scooters will provide greater accessibility to those living further from transport links, and greater options for those who crave open-air city transport.

Dott scooters will be free for all riders on their first journey and 15p per minute thereafter, making it a lower cost alternative to other means of transport.

The public’s perception and usage of public transport has decreased dramatically as a result of the pandemic, in fact, research by Dott in October 2020 revealed that nearly half (42 percent) of people admitted to have actively avoided public transport due to COVID-19. Surveyed again in May 2021, 58 percent of Brits admitted to travelling on public transport less than ever before, revealing a demand for innovation that addresses  the way Brits want to move around in a ‘new normal’.

Craving open air transport and avoiding packed rush hour trains, nearly half (49 percent) of Brits are walking more than ever before in May 2021, a 7 percent  increase from what research showed back in October. And when asked about whether they would consider travelling around the city by e-scooter, over half (56 percent) of Londoners said yes.

Dott e-scooters are designed to ensure optimum stability and are fitted with systems that can control a person’s speed based on the areas they’re riding in - allowing densely pedestrianised areas to be protected. Every e-scooter is checked every 10 journeys, with a complete overhaul every 500 journeys - with any glitches picked up and notified instantly by Dott’s server.

And to ensure all riders know the rules of the road, special ID software matches the rider’s face to their driving licence in the ‘unlocking’ process, safeguarding against underage or potentially dangerous riders.

With safety at their core, Dott has also recruited a safety advisory board made up of local and national organisations, impacted charities, law enforcement, urbanists and riders. Board members include Liz Brooker at Road Safety GB and Steve Wilson, the Metropolitan Police’s lead on e-scooters.

After e-scooters received widespread criticism for being dumped on pedestrian paths, Dott launched its smart parking initiative, creating specific parking areas that helped reduce street pollution and pedestrian injury. This was rolled out in Paris and saw 97 percent compliance amongst users.

And to ensure the scooters are detectable by pedestrians, road users and those who are visually impaired, Dott is working with the University of Salford on audible detection software in partnership with RNIB (Royal National Institute of Blind People). This will ensure the scooters emit a distinctive sound that can be easily recognised from afar, and will be integrated into their tech by July 2021.

With a sustainable ethos at their core, Dott scooters are powered by renewable energy, and are all recycled once no longer usable. In fact Dott reduced its carbon footprint by 56 percent in 2020 thanks to hardware durability, an electric fleet and swappable batteries.

Currently, four London boroughs and Canary Wharf have agreed to take part in the trial, and to  help Londoners explore their city as the nation comes out of Lockdown,  Dott is launching a series of ‘Dott Spots’ - 30 locations around the Capital, each with a unique QR code to scan for free rides and exclusive discounts.

“When used well, e-scooters can be an incredibly safe, sustainable and smart way of moving around cities” said Duncan Robertson, Dott UK General Manager. “We’ve seen how inner city transport in areas of Europe have completely changed once e-scooters are introduced to the city, providing greater accessibility to those who live in it. With people looking for more sustainable and flexible modes of public transport, e-scooters are here to stay - and we're looking forward to seeing the impact they have on how Londoners move around their city”.

Dott will be launching their e-scooters rental service in seven London boroughs this summer.