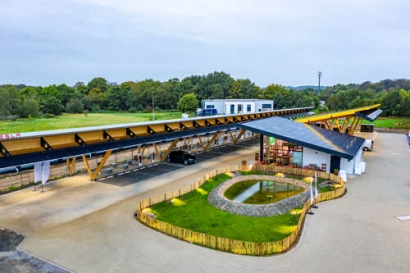 Europe’s largest charging park project, covering 12,000 square meters, is located at the Kreuz Hilden junction between the A3 and A46 motorways in Germany. The first construction phase involved completing half of the planned 114 charging stations. The current 28 fast charging stations from Fastned and Tesla – including 12 superchargers of the latest V3 generation – can be used to charge electric vehicles with charging power of up to 250 kilowatts (kW). The operator of the charging park will also be providing a further four public charging stations with charging power of up to 22 kW and twelve stations for staff and tenants. While waiting for their cars to charge, motorists will now also be able to use the café-bistro with organic bakery that covers 150 square meters.

“I hope the EEG amendment doesn’t disrupt projects like these in the future. Lots of people have approached me about their interest in setting up similar projects. If the EEG amendment places further restrictions on self-consumption, however, any such projects would be stifled,” says Roland Schüren, master organic baker and operator of the charging park. “Not only do Germany and Europe need more e-mobility, they particularly need more e-mobility with electricity from renewable energies.”

“Seed & Greet is currently not only the largest, but is also the most innovative charging park. A sophisticated energy concept with heat recovery, rainwater and process water harvesting, the organic bakery and the wooden frame construction of the park, the planned vertical farming – all of this goes towards making Seed & Greet a flagship project,” says Simon Schandert, co-founder and CTO of Tesvolt. “We are extremely proud to be part of this project with our storage systems.”

The two battery storage system containers from the German manufacturer Tesvolt store electricity from the currently 336 kilowatt-peak (kWp) photovoltaic installation and two small wind turbines in order to shave the expensive peak loads that occur during the charging of electric vehicles. They also, however, store green electricity from the grid when it is particularly cheap and relieve the utility grid when there is more electricity in the grid than is consumed. Gregor  Hinz, energy consultant and technical planner for the project, anticipates that the two storage systems will have paid for themselves in just a few years.

“Tesvolt storage systems can be fully charged and discharged rapidly, which is particularly important from a technical perspective for a charging park. In combination with our hourly purchase of energy on the German spot market, this is the perfect symbiosis for optimal management of self-generated energy,” reports Hinz.

Hinz had a shortlist of three commercial storage system manufacturers for the charging park project. Tesvolt made the grade because its TPS flex storage container offers plenty of power in a comparatively small space and it is one of the few containers on the market that meet the operator’s high technical requirements. Developed by Tesvolt’s engineers, its intelligent battery control ensures optimal charging and discharging of cells, along with an impressive expected service life of about 30 years. Tesvolt has already received several awards for its innovative ideas and projects.

The second construction phase is planned for the end of this year, when all the charging stations will be complete and the solar installation will be expanded to a total power of 700 kWp. The five-storey building complex is scheduled for completion by the end of 2022, offering office space for various tenants alongside the Seed & Greet café-bistro. The vertical greenhouse will then be located between the two buildings, housing salad, strawberries and blueberries grown for use at the bakery.