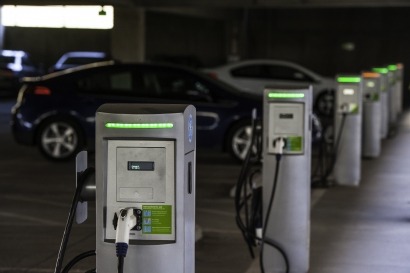 The Greater Manchester Electric Vehicle scheme consists of more than 250 charging points across ten local authority areas in Greater Manchester. The system, which is led by Transport for Greater Manchester (TfGM), will be officially switched on this weekend to be operated by Charge Your Car who will be responsible for managing payments and access on TfGM’s behalf. The launch event will be held on Friday 26th July and Saturday 27th July at the Intu Trafford Centre where visitors will be able to see electric vehicles and speak to representatives.

A number of private sector partners will also be providing charging bays in order to supplement the network. These partners include NCP, Manchester Central, Manchester Metropolitan University, Salford University and the Intu Trafford Centre. The network has been funded in part by £1.7 million of support through the Office for Low Emission Vehicle's funded Plugged In Places scheme. Another £1 million has been provided by Greater Manchester Combined Authority.

There are two easy ways in which to pay for charging an electric vehicle. The GMEV access card includes a range of benefits included a Charge Your Car smartphone app designed to help customers to manage their accounts and provide access energy tracking and usage information. Alternatively customers can use their phones to pay when they arrive at a charging bay.

A map of the various charging points is available on TfGM’s GMEV website.

Tags: Electric vehicle ,Transport
Add a comment
hoor
Gangaur Realtech is a professionally managed organisation specializing in real estate services where integrated services are provided by professionals to its clients seeking increased value by owning, occupying or investing in real estate. entrepreneur fashion
Natasha Edwards
Your article writing is superb, and I have to say you are one of the best writers of this decade. I must know where you get your content from, because I\'ll use that source directly, and acquire some important information. Bartley Vue Condo
Vera Mullins
The author has published a cool article here, and I will share this with a few of my friends now. They are interested in this subject, so I am sure they\'ll enjoy reading this fantastic article. midtown modern price
Danielle Watts
Well, this is awesome work, and I am pleased that I get to read this article today. I am sure my colleagues will be happy about this, as well. I will share this information with them right now. Ki Residences
Michael
A major gratitude to the individual who has distributed this unimaginable article here. The substance here is superb, and it\'s far superior to what I anticipated. I\'ll impart this to my companions now. They will see the value in this similarly as much as me. căn hộ biên hòa universe hưng thịnh
kate
Agree with you with that \"A number of private sector partners will also be providing charging bays in order to supplement the network. These partners include NCP, Manchester Central, Manchester Metropolitan University, Salford University and the Intu Trafford Centre\" percheron horse
nab fia
I would like to thank you for the efforts you have made in writing this article. I am hoping the same best work from you in the future as well. Thanks... pmp exam prep kansas city
archer
Its a good informative and supportive site. terry towelling waterproof mattress protector double
archer
terry towelling waterproof mattress protector Its a good informative and supportive site.
Percale Fitted Sheets
amazing essay, i enjoyed it. you can also enjoy. it has the material of your interest.Percale Fitted Sheets
Subscribe!
12 3
wind