Thursday, 05 July 2018
0
Robin Whitlock
Port Glasgow-based Ferguson Marine has announced that it has successfully led a European consortium in a bid for EU funding for the development of the world’s first sea-going car and passenger ferry fuelled by hydrogen. 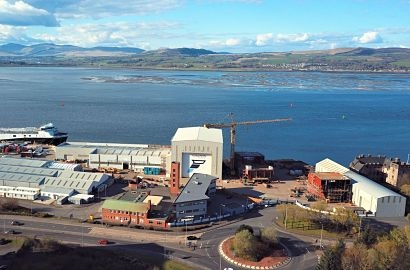 The announcement was made Jim McColl OBE, Chairman and Chief Executive of Clyde Blowers Capital at the Smart Shipping Symposium hosted by the City of Glasgow College Faculty of Nautical Studies in May. The project is expected to cost around 12.6 million euros, of which 9.3 million euros has been awarded by the European Union’s Horizon 2020 research and innovation fund.

The fuel for the vessel, to be named HySeas III, will be produced from renewable electricity, meaning that the vessel will be entirely emissions-free. The project will be delivered by a consortium consisting of Ferguson Marine, University of St Andrews, Orkney Islands Council; Kongsberg Maritime (Norway); Ballard Power Systems Europe (Denmark); McPhy (France); DLR - German Aerospace Center; and Interferry (Belgium/US) the global trade association for ferry operators and suppliers.

The initial objective is to construct and prove the vessel’s modular drive train onshore, where it will be tested for stress and durability under conditions employing real-world data from existing vessels. After construction, the vessel will be employed in and around Orkney – which is already producing hydrogen in volume from constrained and otherwise wasted renewable energy.

“Over recent years Ferguson Marine has been at the global forefront of green marine propulsion technology development” said Chief Naval Architect Chris Dunn of Ferguson Marine. “This exciting project is yet another positive step on that journey and puts us firmly on track to deliver the world’s first zero emission, hydrogen fuel cell powered commercial ROPAX ferry in 2020”.

Ferguson Marine Chief Executive, Gerry Marshall, added that [in Glasgow the UK has] “one of the most innovative and competitive shipyards in Europe which is capable of delivering ground-breaking projects for Inverclyde, Scotland and beyond” and that HySeas III is a living example of how it can be possible to lead the world in marine technology.

The University of St Andrews is home to world-class research and development in hydrogen, battery and other energy technologies and a key part of the developmental aspect is the transferal of knowledge and expertise into real-world applications. Dr. Smith from The University, along with Jim Anderson at CMAL (Caledonian Maritime Assets Limited) initiated the HySeas programme in 2012. Support from Scottish Enterprise allowed the idea to be taken from an early feasibility study to the point where the focus can now shift into test and delivery. Dr. Smith previously played a leading role in the introduction of hydrogen buses into Scotland, a development which is now set to move beyond Aberdeen with Dundee currently following and other Scottish cities considering fleets of their own.

Support will be provided by Horizon 2020, the EU’s largest ever Research and Innovation programme to date with a budget of around 80 billion euros over 7 years (2014 to 2020). The HySeas III project formally began on the 1st of July.