Wednesday, 09 September 2020
1
Robin Whitlock
Spin, backed by Ford Motor Company, has deployed a fleet of electric scooters to help members of the military and civilians on Edwards Air Force Base in Southern California get around a portion of the 470 square mile area. The scooters will use four solar-powered charging and parking hubs installed at various points on the base. The charging stations use technology from Swiftmile. This is the first time a micromobility company has been able to power their scooters using the sun. 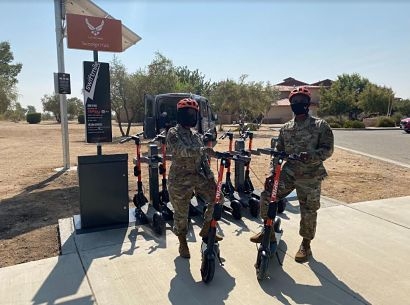 The program launch is aimed at providing an eco-friendly and socially-distanced option for making short trips around the base, reducing the amount of traffic in the area. Spin is responsible for the launch and maintenance of the 17 scooter fleet. The rides will cost $1 to unlock and $0.15 per minute to ride. The e-scooters are equipped with geofencing technology to restrict rides to a portion of the base that is safe. This is the first micromobilty offering for Edwards Air Force Base and the first military base that Spin has partnered with.

Edwards Air Force Base was looking for a micromobility solution and reached out to Spin after hearing about the solar powered charging stations.  As a former Foreign Service Officer, Spin’s Ben Fong was able to identify challenges around transportation on the base and help build a programme that addressed the base’s needs.

"Spin is committed to helping our servicemen” said Ben Fong, Director at Spin. “As a former US Foreign Service Officer, I've worked alongside our servicemen in consulates and embassies worldwide in India and Mexico. I was especially excited to work with Edwards Air Force Base since I understand the challenges they face and the service they provide to our nation”.

Chief Master Sergeant Ian Eishen added that after a few phone calls, the base brought Fong and the team out to Edwards so they could better understand the local use case. Edwards then spent the next year addressing local challenges and concerns to ensure the base was ready and to solve this problem for its Airmen.

The scooters will be used to make short trips on the base and serve as an alternative to walking or driving. They  have a battery range of 38 miles and a capped top speed of 15mph for use on the Air Force Base. The four Spin Hub charging stations are located within a three mile area of the base, and were deployed to give airmen easy access to various base locations from their dorms.

Riders pay to use the scooters through the Spin app where they are able to pay with either a credit or debit card.