Tuesday, 08 May 2018
0
Robin Whitlock
Nidec ASI has announced the launch of a new Ultra Fast Charger (UFC) which it claims can recharge a new-generation EV in less than 15 minutes with minimal impact on the electricity grid. 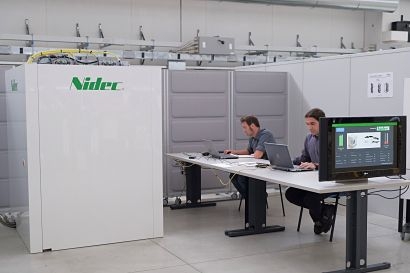 The UFC connects to the national grid through charging towers, simplifying and accelerating the electrification process of infrastructures for supplying electric cars, and reducing operating costs at the same time. The company claims the solution will help pave the way for the spread of electric vehicles, a market which in many countries is still struggling to get off the ground, but which has huge opportunities for growth in the near future.

The new Ultra Fast Charger acts as a ‘buffer’ between the electricity grid and the recharging tower and incorporates 160 kWh of installed batteries with advanced power controls. It is the prototype of a new generation of ultra-fast chargers, which can be connected to LV or MV grids and which, against an energy requirement of only 50 kW, can supply 320 kW of power to a vehicle, thereby multiplying the power delivered by 6 compared to that drawn from the grid.

Nidec ASI claims that the system can rapidly recharge EVs up to 80 percent of their capacity in less than 15 minutes, guaranteeing the vehicles up to 500 km travel and also allows the recharging of 2 vehicles in parallel or 3 in series. It has an efficiency of 95 percent and, thanks to its compact dimensions, it activates an extensive service able to meet the widespread distribution requirements of the electric vehicle market’s players. Nidec ASI’s recharging systems are designed to be supplied both from the electricity grid and from renewable sources, such as solar energy, and can be bi-directional: they can be used not only for recharging electric vehicles, but also the grid (Vehicle-to-Grid - V2G).

“We think it’s only a matter of time before the electric car comes to the forefront throughout the world” said  Matteo Rizzi, Director, Global Sales & Marketing, Renewables (PV, BESS & EV) of Nidec Industrial Solutions. “In many countries – such as those of Northern Europe, the USA and, first and foremost, China and Japan e-Mobility is already a widespread reality and responds to the ever more pressing need to reduce pollution and noise, particularly in urban centres. “Armed with 180 years’ experience in the power electronics sector, with widely acknowledged know-how in power management, in the effective management of the electrical grid, and a consolidated leadership in the Battery Energy Storage systems (BESS) and several years of commitment to the renewable energy and electric vehicle sectors, we have succeeded in engineering an advanced solution with a high vehicle recharging capacity, able to maintain a constant flow in the electricity grid, thereby reducing the risk of black outs that could be generated in the future as the use of electric cars becomes more widespread”.

Nidec ASI is developing an entire portfolio of products to meet the needs of all market players, divided in three different formats: in addition to the ultra-fast chargers, it also offers LV Charging Stations with centralised batteries, thanks to which 12 vehicles can be charged to 80 percent of their capacity in an hour, and MV Charging Stations, possibly without batteries, which can be used to deliver greater power and recharge numerous cars (more than 12 vehicles in an hour) at the same time, such as a fleet of corporate cars, or trade vehicles in a logistics enterprise.

Nidec ASI changed its name in 2012 when Nidec acquired the company Ansaldo Sistemi Industriali (ASI). It offers customised solutions throughout the world for a wide range of industrial applications. Nidec specialises in heavy duty applications in which high power and high performance are key: electric motors and generators up to 65 MW of power (87,000 HP); power electronics inverters and converters; automation and software for industrial processes; retrofitting of power plants and hydroelectric generators; integrated systems for the production of electrical energy from renewable sources and their stabilisation in connecting to the national grid.