Friday, 24 January 2020
0
Robin Whitlock
Nissan and Uber have signed a deal to support the introduction of 2,000 all-electric Nissan LEAFs for drivers who use the Uber app. 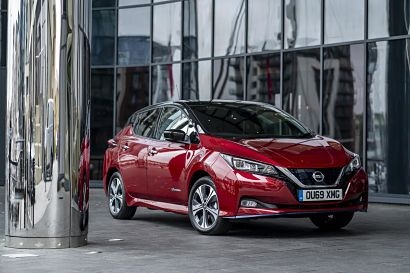 The fleet of 40 kWh Nissan LEAFs, which can travel up to 168 miles on a single charge and are manufactured in Sunderland, will be offered to drivers as part of Uber’s Clean Air Plan. Nissan will provide Uber with a dedicated EV education programme, transaction price and marketing plan to drive uptake of the zero emission vehicles. This deal will help to deliver Uber’s vision for every car on the app in the capital – around 45,000 drivers – to be fully electric from 2025.

Launched in January 2019, Uber’s Clean Air Plan aims to tackle air pollution by helping drivers upgrade to an electric vehicle through the introduction of a Clean Air Fee - 15p a mile is added on to all London journeys which will help drivers with the cost of adopting an electric vehicle. In the first year, Uber has raised more than £80 million to support drivers transitioning to electric vehicles, with more than £200 million expected to be raised over the next few years.

Through the Clean Air Plan, drivers will on average save £4,500, depending on the miles they’ve driven, off the cost of switching to an electric car. Once a driver has adopted a fully electric vehicle, the Clean Air Fee is used to support ongoing vehicle costs.

In the first year of Uber’s Clean Air Plan, 900,000 Uber journeys have taken place in electric vehicles, an increase of more than 350 per cent on the previous year. Over 500 drivers every week are now using zero emission electric vehicles.

“Through innovation and collaboration, companies like Nissan and Uber can tackle the challenges of advancing personal urban mobility, whilst also improving air quality in our major cities” said Andrew Humberstone, managing director, Nissan Motor (GB) Ltd. “As the UK’s best-selling EV, the Nissan LEAF is the perfect vehicle to support Uber’s ambition of a 100 percent electric fleet in London for 2025. Not only will passengers enjoy the quieter ride that comes from all-electric driving, but cyclists, pedestrians and other road users will also benefit from the zero-emissions powertrain.”

Jamie Heywood, Regional General Manager for Northern and Eastern Europe, Uber, added that the company’s bold vision for London is for every driver on the Uber app to use an all-electric vehicle by 2025 and that the partnership with Nissan is a hugely significant step towards meeting this goal.

To meet the increasing demand for electric vehicles in the capital, Transport for London has installed more than 1,000 EV charge points in the last year alone. Conversely, central London has nearly half as many petrol stations per car as the Scottish Highlands and only four remain within the congestion-charge zone.

A recent review of London boroughs found that Westminster council had installed 375 public chargers by the end of August 2019 – more than any other local authority in the UK.

In 2010, Nissan launched the first mass-market electric vehicle – the LEAF – and has since sold more than 450,000 models globally.

In 2016, Nissan supplied a fleet of 20 all-electric LEAFs to Uber as part of an extensive EV trial in the capital. It was the first time pure EVs had been available for hire through the Uber app in London. The trial was run in partnership with the Energy Savings Trust (EST), to look into the feasibility of running large numbers of electric private hire vehicles in the UK.