Monday, 17 May 2021
0
Robin Whitlock
SSE, one of the UK’s leading utility providers, has identified the Renault Zoe Van as being the ideal vehicle to help with the electrification of its commercial vehicle fleet and contribute to the company’s commitment to have ‘net zero’ carbon emissions by 2050 at the latest. 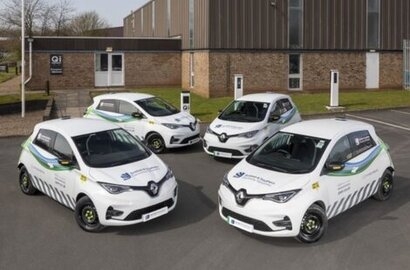 SSE has introduced four Zoes into its commercial vehicle fleet after the UK’s only fully electric car-derived van was recognised as the perfect replacement for several ICE vehicles where the range of existing commercial-focused EVs had previously compromised the transition to pure electric power. The company is set to take delivery of a further eight with more in the pipeline.

SSE’s new Zoe Van’s will be used by its supervisors and team leaders to visit the company’s operational sites and developments throughout Scotland. The award-winning Zoe Van has a range of up to 245 miles on a single charge enables SSE’s personnel to visit more remote areas, particular in the north west of the country, where the charging infrastructure can be limited, while enjoying the refinements and drive associated with the Zoe E-tech 100 percent electric passenger car upon which it is based. At the same time, the dedicated load area allows operatives to easily and cleanly transport the specialised tools, wet weather clothing and PPE they require for their roles.

As well as enabling SSE to continue its drive to have 3,500 of its 4,000 commercial vehicles fully electrified by 2030, the Zoe Van will help the company to lower its environmental impact in terms of both emissions and noise. Notably, SSE estimates that over a five-year period each Zoe Van will provide a saving of 23.5 tonnes of CO2.

In addition to the driving range of the Zoe Van, SSE’s decision was influenced by its Whole Life Costs being lower than those of a similar-sized petrol car-derived van, offering significant savings in terms of fuel, VED and servicing costs. The spread and support of the Renault dealer network, plus the standard eight-year battery warranty, further enhanced the appeal of the Zoe Van to SSE, while its flexible charging means SSE’s personnel will be able to charge their vehicles at home without issue.

The Zoe vans were converted to SSE’s specification by Renault-accredited converter, Qi, which added details including a hygiene station and fire extinguisher. All were specified in Business trim, which includes such standard features as full LED headlights, automatic air conditioning, heated electrically adjustable door mirrors, cruise control/speed limiter, EASY LINK radio with 7-inch touch screen and Smartphone integration with Android AutoTM and Apple CarPlayTM. Completing the new Zoe Van is a unique wrap by Mediafleet, which haloes their pure electric power and even glows in the dark to ensure that SSE’s commitment to electrifying its commercial fleet can be seen day and night!

“As an EV100 company that is committed to switching its fleet to electric, and with our focus on renewable energy and making a significant contribution to building low-carbon electricity systems fit for the future, introducing the Zoe Van to our operations fits perfectly with our strategy and ethos” said Neil Chamberlain, National EV Manager, SSE. “The range of electric LCVs has always been a bit of an issue in the past for the roles that these vehicles are used for, so that of the Zoe Van now gives us the option to make the transition and look at other areas where a van is traditionally used but there isn’t a need for a high payload. The comfort is a big benefit to our operatives and, for those that are negotiating the narrower, more demanding roads of the Highlands, the compact dimensions are another welcome bonus. With the Zoe Van we’re further lowering our environmental impact at no detriment to our operational costs or effectiveness.”

The Zoe Van is based on the multi award-winning Zoe electric passenger car, which won the ‘Best Small Electric Car’ category in the 2020 What Car? Awards and which has been honoured at the annual What Car? ceremony for the last seven years. The commercial version is already an award-winner, having recently won the compact van ‘Best Value for Ownership Costs’ category in the new What Car? Van Awards.

Combining the same advanced specification of the Zoe with a load volume of one cubic metre and a maximum payload of up to 457kg excluding the driver (Business specification), the Zoe Van is available in two generous trim levels – Business and Business+.

It offers a WLTP combined range of up to 245 miles on a single charge on Business models and via the 50kW DC charging option can be charged from zero to 80 per cent in just one hour and ten minutes. Its R110 motor delivers zero to 31mph acceleration in only 3.9 seconds – making the Zoe Van electric ideal for urban journeys with stop-start traffic, and a perfect fit for tasks such as multidrop deliveries, and for use by utility companies and local authorities, for example. All of which are completed with zero tailpipe emissions.