Thursday, 17 December 2020
3
Robin Whitlock
Shoppers in London’s West End were treated to Covid-secure festivities from the back of an all-electric Vauxhall Vivaro-e , to help spread the word that electric vehicles are welcome in city centres. 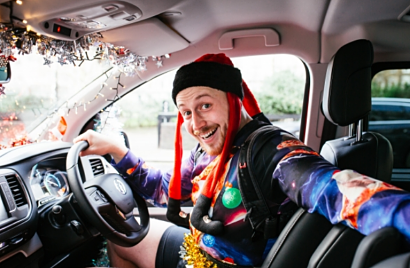 Vauxhall Motors teamed up with social media sensation SUAT to create the UK’s first ever socially distanced drive-by ‘Carol Service’, in a bid to spread some last minute Christmas cheer ahead of Tier Three restrictions being imposed on London on Wednesday.

SUAT hit the streets of London’s West End in a fully electric Vauxhall Vivaro-e Life, playing remixed versions of classic Christmas songs and carols. His setlist featured classics from ‘Silent Night’ to ‘Fairytale of New York’ after a OnePoll survey of 2000 Brits found that they were the nation’s favourites.

The socially distanced pop-up ‘gig’ was designed primarily to spread some cheer in lieu of traditional festivities like work Christmas parties and Carol Services, many of which have been scrapped due to London heading back into tier three Covid-19 restrictions. Meanwhile, the nation’s favourite Christmas tunes received modern ‘electro’ remixes to help get people talking about electric vehicles and celebrate Vauxhall itself ‘going electric’ with the launch of the all-electric Corsa-e, Vivaro-e and forthcoming Mokka-e.

“With London heading into tier three tomorrow it’s been fantastic to hit the streets with Vauxhall to play my special Christmas remixes to those who are going to miss out on their usual Christmas celebrations” said SUAT, whose real name is Zach Sabri. “The reaction has been brilliant! It was great to see so many smiling faces and some people even said it was the first ‘live’ music they’d heard all year. Things are going to be a bit different this Christmas, but it’s great to do something socially distanced and Covid secure that can still give people a dose of Christmas fun”.

Here’s how Brits responded when asked to name their favourite Christmas songs and Carols:

Have Yourself A Merry Little Christmas: 25 percent

Away In A Manger: 24 percent

The survey, which also looked at how Brit’s use their cars at Christmastime, found that it was the second most popular place to listen to Christmas music after the cosy confines of our homes. It also identified that 20 percent of Brits prefer to pick and transport their own tree home each year, while a huge 50 percent opt to re-use the same artificial tree year after year.

“With all the restrictions we’ve faced this year, we’ve relied on people like SUAT to keep the nation entertained" Kate Oyler, Head of Brand Communications at Vauxhall Motors added. "He’s been a great Christmas Cheer ambassador and just like his electronic reinventions of classic British Carols, our Vivaro-e is a British classic redefined through the power of electric. Whether staging a drive by carol service, transporting your tree or simply getting your whole family from A to B, electric vehicles give you the flexibility you need, and with zero driving-emissions they’re welcome in city centres with no congestion charge to pay.”