How Do the Changing Seasons Impact Renewable Energy?

Wednesday, 26 October 2022
2
Emily Newton
Extreme weather events, from excessive heat indexes to polar vortexes, have shone through the United States energy sector's cracks. As the demand for reliable power intensifies, the debate over whether renewable power can meet population demand is gaining momentum. 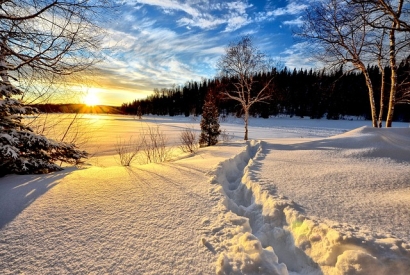 Image by Alain Audet from Pixabay

Renewable energy accounted for 29% of global energy generation in 2020, following a 3% increase in usage as the fossil fuel market declined. In 2021, experts predicted low-emissions energy would have a record year of growth by another 8%.

However, it's not enough amid a crumbling grid infrastructure and increasing climate change. According to a 2022 report by the World Meteorological Organization (WMO), the global supply of renewable generation must double by 2050 to reach net zero.

Advocates of fossil fuels often tout misconceptions about renewable energy, implying that climate change and seasons impact renewable energy negatively. Instead, they believe conventional energy sources like coal and oil will keep households and businesses up and running, providing a more energy-secure nation.

Nations that have transitioned to clean energy have proven fossil fuel enthusiasts wrong about renewables. For instance, Iceland generates 100% of its electricity from geothermal and hydroelectric power — with much colder temperatures than the U.S.

Meanwhile, Uruguay generates more than 98% of its electricity from renewable sources like geothermal, hydropower, solar and biofuels, despite recently experiencing extreme droughts and heatwaves.

Countries that have made significant strides in renewable energy set an example for the U.S. to follow — understanding where our renewable energy progress lies and how changing seasons impact them is critical to boosting generation. Here are six lessons we can take from today's renewable energy projects to strengthen and clean up our power grid.

Conventional energy sources like natural gas or coal power plants have one advantage — they can operate regardless of location.

Nearly half of the U.S. hydroelectric power sources are on the West Coast — California, Oregon and Washington — generating 80 million kilowatts and accounting for 6.5% of the total U.S. power capacity during the summer of 2021. Because hydroelectricity requires precipitation, engineers have had to modify designs for deviating annual and seasonal snow and rainfall.

The deep freeze over Texas in February 2021 led to a massive grid failure, plunging over 4.4 million people into darkness without heat. The event resulted in 246 confirmed deaths from frigid temperatures and injuries.

Meanwhile, a three-year drought and an excessive heat wave threatened to halve California's hydroelectric power capacity in the summer of 2022, which accounted for one-third of the state's power supply in 2020.

These events demonstrate that weather affects all energy sources, regardless of whether or not they're renewables. Wind turbines shut down without adequate wind speeds, but conventional power sources also have difficulty withstanding harsh conditions.

Climate change shows no signs of slowing down — and neither is energy demand. That's why optimizing the current energy sector to integrate renewables is crucial for a more reliable system.

A common myth about solar panels is that they don't work in the winter — but nothing could be further from the truth. They actually work more efficiently when it's cold.

Solar cells are semiconductors, meaning colder temperatures enhance their effectiveness and increase energy production — much like any other electronic device. That's not to say that the changing seasons don't affect them.

Solar panels generate energy from photovoltaic light rather than heat, so they're best utilized in regions with plenty of sunlight. Since the days tend to be much shorter in the winter, there's less photovoltaic light for energy.

Also, harsh weather and debris buildup could shorten the panels' average life span of 25 to 30 years, which is why regular maintenance is essential. Fortunately, the slanted design and heat that emanates from a house melt snow rather quickly, dragging debris and dirt accumulation with it for cleaner panels without risking damage.

Reliable power is challenging as the changing seasons impact renewable energy. However, inclement weather, such as an ice storm, hurricane or heat wave, makes the demand for distributed energy resources all the more critical.

Current grids in the U.S. are outdated, built during the 20th century when power demand and utility costs were more stabilized. However, the influx of various renewables now requires an adaptable grid system with advanced solutions for energy storage.

Although power plants rely on backup diesel generators, they're usually unreliable because of fuel supply shortages. One solution is microgrids with integrated distributed energy technologies.

Studies have shown that microgrids with at least one renewable power source and energy storage system are more efficient at jumpstarting emergency generators to return power to customers. This ensures the grid is resilient even during the worst conditions brought on by changing seasons.

Federal and state incentives have encouraged the widespread adoption of solar panel systems. However, per the Consolidated Appropriations Act of 2021, similar tax credits and rebates are now available for small wind turbines, geothermal power and fuel cells.

Homeowners who install these renewable systems before 2023 earn 26% back in tax credits. Between 2023 and 2024, potential tax credits will stand at 22%.

However, even those who don't receive government subsidies often see immediate savings on their monthly energy bills when they transition to renewable sources.

Incentives are a powerful tool to encourage customers to reduce power consumption during critical loads. Expanding new incentive programs that reward people for energy efficiency at home can further relieve utilities of extreme electricity demand on the hottest or coldest days of the season.

Falling materials prices and technology advancements have propelled battery storage production — and it couldn't come at a better time.

Current battery storage only delivers a few hours of electricity with less efficiency in extreme temperatures, which isn't sufficient when facing days-long power outages due to major storms. As seasonal weather conditions intensify, manufacturing longer-lasting batteries is a top priority.

Progress Is Made Despite How Seasons Impact Renewable Energy

Emily Newton is a freelance writer with over six years of experience writing science environmental articles. She’s also the Editor-In-Chief of Revolutionized, an online magazine that shares the latest innovations in science and technology