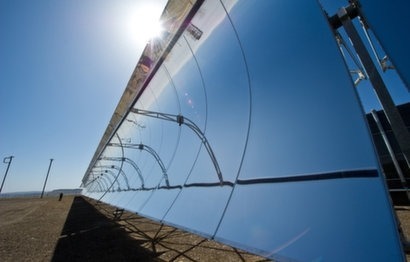 The award was made after Aalborg CSP completed a pre-engineering study and determined the technical and economic viability of the project as well as the scope of the system, which will combine multiple technologies for renewable heat, fresh water and electricity production, enabling clean energy-based horticulture in the Australian desert. Based on the positive findings, Aalborg CSP has now received the order to supply the Integrated CSP Energy System, a novel configuration of CSP technologies, enabling year-round operation of Sundrop Farm’s horticulture activities in the South Australian arid region of Port Augusta.

In collaboration with John Holland, Aalborg CSP will develop and deliver an Integrated CSP Energy System for the operation of Sundrop Farms new greenhouse facilities. Sundrop Farms is a pioneering arid climate agricultural business with a unique concept of growing high-value crops in the South Australian desert using seawater and sunlight as main resources. The company has developed a pilot plant which has been operational since 2010 and this has encouraged the large-scale application of the technology, incorporating an expansion of current operation by 20 hectares with the aim of producing over 15,000 tonnes of fresh vegetables annually for Australian consumers.

“The Sundrop project is a good example of how early pre-engineering involvement and strong collaboration can lead concepts to larger scale project realisation” said Svante Bundgaard, CEO of Aalborg CSP. “Aalborg CSP will ensure that the solar energy plant is fully operational for the 2016 Australian Spring.”

The system is based on a CSP tower technology and will be capable of heating the greenhouse in wintertime and on cold summer nights, to provide fresh water by desalinating seawater drawn from Spencer Bay, 5 kilometres from the site, and to periodically run a steam turbine to produce electricity. It is scheduled to be operational by October 2016.