Monday, 01 October 2018
0
Robin Whitlock
The Johan Cruijff ArenA Amsterdam has been awarded The Eco Award for its sustainable energy programme at the prestigious T3 Awards 2018. 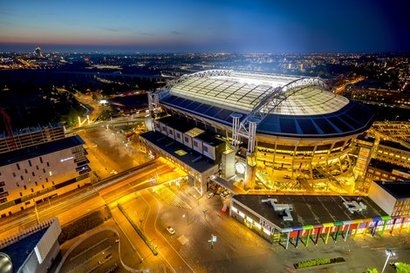 The building’s energy storage system combines the equivalent of 148 Nissan LEAF batteries, 4,200 solar panels and Eaton power conversion units, enabling a more sustainable energy system and creating a circular economy for electric vehicle batteries. The system was switched on in June and was the result of a collaboration between Nissan, Eaton, BAM, The Mobility Huse and the Johan Cruijff ArenA, supported by the Amsterdam Climate and Energy Fund (AKEF) and Interreg.

The arena now boasts Europe’s largest energy storage system using second-life and new electric vehicle batteries in a commercial building. The 3 MW, 2.8 MWh system provides a more reliable and efficient energy supply and usage for the stadium, its visitors, neighbours and the Dutch energy grid. The system’s capacity also means that the energy produced by the 4,200 solar panels on the roof of the ArenA can be stored and used optimally.

“We chose the Johan Cruijff Stadium in Amsterdam for our inaugural Eco Award because of the boldness of its vision and the excellence of its execution” said Duncan Bell, Lifestyle editor, T3.com. “The fact that it not only uses solar power but also stores it on reclaimed Nissan LEAF batteries is just a perfect mix of sustainability and recycling. It’s ingenious and ambitious, and a remarkable feat of engineering.”

Francisco Carranza, Managing Director, Nissan Energy, added that  the Johan Cruijff ArenA demonstrates that re-purposing the batteries of Nissan electric vehicles can contribute to making the whole energy system more efficient and sustainable. Nissan is putting its electric ecosystem at the heart of a sustainable future, transforming the way people drive and live.

T3 says its mission is to seek out and showcase the things that help consumers live a smarter, better life. It is one of the UK’s leading consumer lifestyle publications with over two million monthly visitors to the T3.com website and more than 43,000 monthly print magazine buyers.

Welcoming more than two million visitors annually, Johan Cruijff ArenA is an important player in the top league of international, multi-purpose stadiums. It is the home of AFC Ajax and the stage for the Dutch national team, concerts, dance events and business meetings.

The stadium’s new energy storage system and related company, Amsterdam Energy ArenA BV, emerged from the innovation programme managed by Amsterdam Innovation Arena, in which knowledge institutions, governments and companies such as BAM, Nissan, Eaton and The Mobility House are working on the stadium of the future.