Friday, 16 September 2011
0
Toby Price
An unlikely corner of Muncheln in Germany was the inspiration for a novel new solar heating system which its Ukranian designers hope could form part of the redevelopment of an area of flooded opencast mines that are to be converted into a recreational zone. 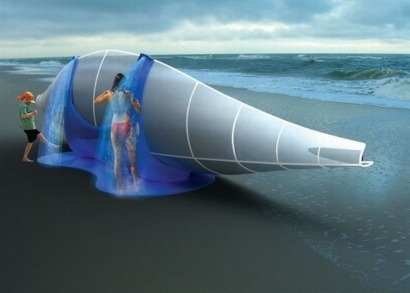 A small industrial design company from Ukraine, Macoshdesign, has come into the spotlight after designing a shower unit which uses solar energy to heat water and wind power to create a pleasant background music while shower users’ go about their ablutions.

The Solaria system works on the principle of a solar oven, concentrating the sun’s rays onto an absorber tube which extracts heat to provide hot water for showering. It also includes what its designers describe as “a giant harp”: 34 strings tightened along the frame of the shower unit which create “a unique interactive sound space” when the wind blows.

The concept has been designed to enhance a brown field site which was formerly an opencast mine near the town of Muncheln and is being restored as part of a major project called Muncheln Marina.

The project aims to create a large entertainment/sports/educational complex around an artificial lake created in the former mine, and Macoshdesign believes its Solaria concept could contribute to bringing people into the area to swim in the lake. The design company recognises that its concept for a musical solar shower is an attention grabber for new renewable sources of energy but is also confident that it is a viable option.

“We used solar thermal energy because it is the simplest and cheapest way to heat water. There are no costly photovoltaic elements, etc. in the project — everything is very simple”  Macoshdesign’s lead designer, Alexander “Suricoma” Babich, told Renewable Energy Magazine.

“The wind is our musician!”

Babich goes on to explain that the Solaria shower unit not only uses solar energy but also makes use of the power of wind. “The wind is our musician,” he says. “The air waves eddying inside our ‘shell’ pluck strings thus creating a music backdrop for our piece.”

While Babich reveals that the Solaria design has not been developed commercially, he stresses that it was “an experiment aimed at directing people's attention to the flooded mines in the city of Muncheln” and that a full-size functional Solaria has not yet been created. Nonetheless, Macoshdesign is reading to consider any kind of commercial offers to construct and install these shower units.

The company has also developed a concept for a new toilet which uses rainwater for its water supply needs. In the cold winter time, the facility can also use melted snow. Babich highlights that “another good thing about this invention is that it helps to resolve the problem of snow in cities”, using a geothermal pump to help melt the snow and free the water for use in the public toilet.

Macoshdesign has received numerous awards and prizes in Ukraine and Russia for its novel toilet design and also received extremely positive feedback from the little-known but no doubt highly important World Toilet Organisation, although the design has not yet entered mass production. “We are on the lookout for sponsors for this project," says Babich, who reveals that his team are also working on a wind-powered mobile electric generator.