Friday, 25 May 2018
0
REM
Launched in 2015, ‘RealValue’, funded by Horizon 2020 has just released its findings following the conclusion of the €15.5 million ($18 million) European small-scale energy storage project. 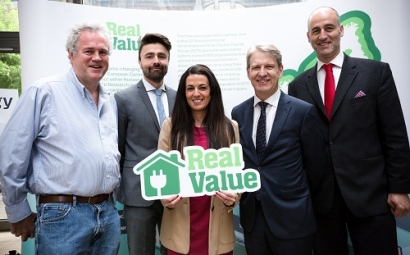 Believed to be one of the largest pilot studies of the current BRIDGE Horizon 2020 Smart Grid and Energy Storage projects, RealValue completed installations in homes, commercial premises and public buildings in three countries – Ireland (550) Germany (150) and Latvia (50).

The data and customer engagement research have shown that smart electric thermal storage technology has the potential to transform how consumers use and store energy, in the form of heat, in homes and buildings

Explaining the physical and academic elements of RealValue, Rowena McCappin, Project Director at Glen Dimplex, stated, “Having the entire electricity value chain involved in RealValue was of the utmost importance and facilitated a 360-degree overview of the potential for smart electric thermal storage.

“We fitted properties with smart electric thermal storage space and water heating devices, plus smart plugs, sensors, smart meters and gateways. Using these physical demonstrations, combined with advanced ICT and innovative modelling techniques, RealValue has proven that an aggregated population of SETS can bring benefits to all market participants.”

The findings suggest there is potential for smart electric thermal storage throughout parts of Europe where there is need for more flexible demand in systems that rely increasingly on renewable generation.

It was discovered that in Ireland and Germany the indicators of success were most promising due to high shares of wind power generation and relatively low shares of pumped/reservoir hydropower and interconnector capacity.

The RealValue project has shown that decentralized smart electric thermal storage systems can be successfully linked to the energy markets, so that renewable electricity is integrated better into the energy system.