Wednesday, 06 June 2018
0
Robin Whitlock
Magnis Resources has announced the signing of an agreement to fast-track the Townsville lithium-ion battery plant project in Queensland, Australia, as part of the Imperium3 consortium. 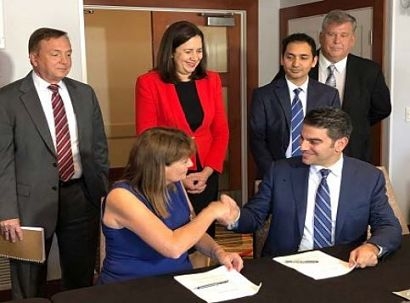 Siemens, Celgard, Probuild Norman Young & Disney, Ausenco and WT Partnership have now joined the consortium and Queensland State Government has committed $3.1 million in funding towards the feasibility study, which has already commenced and will be completed by the project partners before the end of the year. The agreement was signed by representatives of Imperium3 and Townsville Mayor Jenny Hill, witnessed by Queensland Premier Annastacia Palaszczuk, at a signing ceremony at the BIO Conference in Boston, USA on 3rd June. Senior representatives of Siemens and Celgard were also present.

Siemens intends to play a major role in digitalisation and automation of the next generation of lithium-ion battery plants by using its Siemens digital enterprise portfolio.

“Queensland has long been the powerhouse of Australia” said Queensland Premier, Annastacia Palaszczuk. “Now as we move towards our 50 percent renewable energy target, storage solutions are a vital part of enhancing our strengths in renewable generation. Storage is fundamental to making renewable energy reliable, and that’s why my Government has already committed more than $3 million towards assessing the feasibility of this project”.

Townsville Mayor, Jenny Hill, added that the battery plant has the potential to transform Townsville and charge the city’s economy for decades to come.

Stage 2 financing discussions are currently underway with various members of local, state and federal government, along with government funds, super funds and private groups. However, the feasibility study is seen as an essential requirement for the next stage of funding.