Thursday, 18 May 2017
0
Robin Whitlock
Phase 1 of the Lefdal Mine Datacentre (LMD) in Norway was officially opened in a grand ceremony on May 10th and is ready for use. 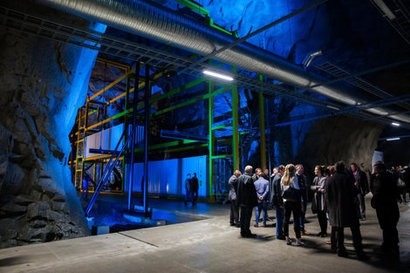 The datacentre, located on the west coast of Norway in the Sogn og Fjordane region, was constructed on the site of an old mineral mine. It operates exclusively on hydroelectric renewable energy from the nearby fjord which also provides 45 MW of cooling. This enables a power usage effectiveness of between 1.08 and 1.15 and helps to reduce costs for customers. It is also one of the most efficient datacentres in Europe, as well as being one of the greenest and most secure.

The mine in which the datacentre is located consists of six levels divided into 75 chambers, thereby providing a potential white space area of 120,000 square metres. The width of the streets within the mine allows the placement of containers on both sides of the street with a transportation route in the middle. The height of the streets (17 metres) enables stacking of the containers. The use of containers also enables quick installation in the facility and easy movement or replacement.

Customers preferring a traditional data hall can choose from several options. IBM and Rittal have developed a preconfigured, modular and scalable infrastructure solution based on three storey concrete buildings with three floors of whitespace. These buildings are constructed within the mine with a low construction cost and 2,000 to 2,500 square metres of whitespace per building. Customers can lease base units or an entire building. This allows different cost effective scalable solutions, making the facility extremely flexible and enabling customers to exploit a “pay as you grow” model, with no risk of paying for capacity not needed. Cloud resiliency services have been provided by IBM.

“The ongoing digital transformation will undoubtedly lead to higher demand of datacenter capacity and in consequence to highly efficient industrialisation of datacenter infrastructure and services, in other words - intelligent standardisation” said Dr. Karl-Ulrich Köhler, CEO of Rittal International. “We are a strong believer in and experts of highly efficient industrialisation. This is in the DNA of our company since 1961, the year Rittal was founded”.

Jørn Skaane, CEO at Lefdal Mine Datacentre, added that LMD can facilitate all known concepts for white space solutions while the facility structure allows a streamlined solution for containers in different shapes and sizes including customised power density, temperature, humidity, and operational equipment.

LMD will gradually begin to move in customers, some of the first international customers being iNNOVO Cloud, LocalHost AS and Fortuitus AG.