Thursday, 19 October 2017
0
Robin Whitlock
NAWA Technologies has developed a new generation of batteries that can be recharged in seconds for up to a million cycles and is also safer and more environmentally friendly to manufacture than lithium ion. 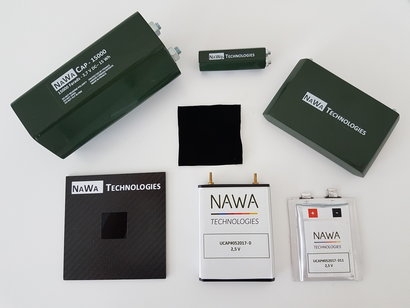 The new batteries are more efficient and powerful than lithium ion, as well as being safer and more environmentally friendly to manufacture. They are based on the ultra-capacitor principle and feature vertically aligned carbon nanotube electrodes. These have a unique coating which enables the batteries to provide five times the power density than existing ultra-capacitors.

The batteries can be charged and discharged in seconds and can do so over a million cycles without any loss in performance, far in advance of conventional lithium-ion batteries which take minutes, sometimes hours, to fully charge and typically have 5,000 cycle limits.

NAWA Technologies, based in the South of France, has also pioneered a specialised nano-manufacturing process and has begun low volume pilot manufacturing of the batteries. The company believes that key markets for the batteries will include automotive, industrial, defence, aerospace, power tool and personal mobility. They could also play a key role in managing energy across the smart electricity grid.

The company’s Chief Operating Officer (COO), Pascal Boulanger spent 20 years at the CEA (French Atomic and Alternative Energies Organisation), working across a variety of fields including nuclear energy, solar photovoltaics and smart grids. In 2008, he joined one of the first R&D teams in Europe working on new nanocarbon structures: carbon nanotubes and graphene.

Within two years the team of researchers had shown that nanomaterials could be produced on a large scale and at a competitive cost. And in 2013 NAWA Technologies was born, spun off from the CEA, creating 25 jobs in Rousset, in the south of France.

Co-founder of NAWA Technologies is Sales and Marketing VP Ludovic Eveillard, who has held various senior positions in R&D with companies such as Honeywell. Technical Director is Harald Hauf, who has 23 years’ experience in the semiconductor and solar photovoltaic industries, while General Secretary is Veronique Goudet who brings with her huge experience in management, having worked in finance for Deloitte among other companies, and is a trained lawyer.

The founders of the company married ‘nano’ and ‘clean’ technologies with carbon as the material of choice because it is abundant, accessible and natural. The company’s manufacturing process minimies the environmental impact while its products all have a second life and are recyclable. Because NAWA Technologies Ultra-Fast Carbon Batteries are carbon-based, they do not suffer the same thermal issues as conventional storage systems.

There is a significant difference in the way the batteries store electricity too. In a regular ultracapacitor, there is a purely electrostatic reaction, while with a lithium-ion battery there is a purely chemical reaction. NAWA Technologies’ combination of vertically aligned carbon nanotubes, a unique coating and a chemical electrolyte, allows its Ultra-Fast Carbon Batteries to sit between regular ultracapacitors and lithium-ion batteries, offering huge potential. That means higher-energy density and higher-power than regular ultracapacitors. They are also cleaner, safer, more reliable and kinder to the environment than current storage systems.

“With our new Ultra Fast Carbon Battery, we have combined the best nanotechnology with the best clean technology” said Pascal Boulanger, COO of NAWA Technologies. We have a ground-breaking battery that stores more electricity, more rapidly – and it is safer, more reliable and kinder to the environment than current storage systems. What is really exciting is the sheer potential of ultracapacitors.

The company says the batteries are perfect for use in the automotive industry in hybrid cars where they can, for example, rapidly store (and deploy) energy from regenerative braking systems. Other applications include logistics, where faster, more rechargeable electric storage devices with longer lives are ideal for fleets of factory or warehouse-based vehicles.