Friday, 05 October 2018
0
REM
Russia’s Hevel Group, and French company, Saft, have signed an agreement to pioneer a megawatt-scale energy storage systems for solar power plants in the Altai Republic, a remote region in southern Siberia. Integrating Saft’s lithium-ion (Li-ion) energy storage technology with the solar plants will ensure a reliable and predictable supply of electricity as well as providing a range of ancillary services to maintain the stability of the local power grids. 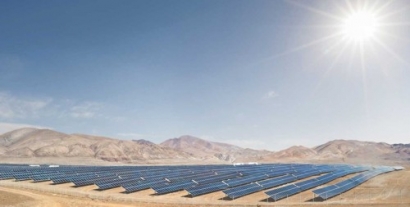 Hervé Amossé, executive vice president of Saft’s TTG division, said, “This agreement with Hevel is an important development that will see Saft’s first ever ESS deployed for a project in Russia. We look forward to helping to deliver reliable, green electricity for one of the world’s last remaining relatively untouched wilderness regions.”

As Hevel Group’s CEO Igor Shakhray stated, “Integration of large-scale energy storage systems in solar power plants leads to the next stage of renewables in Russia that have evolved into an industry with almost 6 GW capacity.”

With an area of 92,900 square kilometers, Russia's Altai Republic is home to just over 205,000 people – for comparison, the US state of Indiana is the same size but has a population of 6.5 million. The Republic contains the ‘Golden Mountains of Altai’ a UNESCO World Heritage Site, a transnational park, three federal protected areas, 120 plus natural monuments, and a growing number of regional nature parks and wildlife refuges.

Hevel is planning to reduce the current energy shortages in the Altai Republic with an electrification program based on reliable, efficient and 100 percent environmentally friendly solar power. It already has four solar plants in operation with a total capacity of 40 MW and intends to expand this to about 140 MW by 2020. Hevel also plans to use ESS in off-grid power plants in Siberian and Far East regions.

To demonstrate the capabilities of ESS technology a pilot project is being carried out to install a Saft Intensium Max[2] containerized lithium-ion (Li-ion) system at the existing 10 MW Kosh-Agach solar plant. This is one of the sunniest places in Russia, with over 300 cloudless days per year.

Depending on the results of the pilot, the next stage will be to move to commercial implementation, with several ESS units with a total power in excess of 20 MW, mainly in off-grid locations, to be installed between 2020 and 2022.