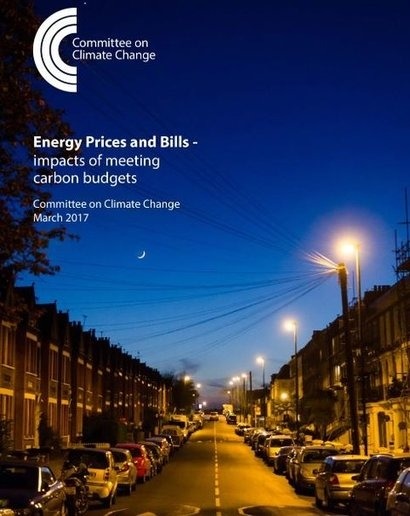 New analysis by the CCC has shown that efforts to tackle climate change and improve energy efficiency have occurred alongside reductions in household energy bills since the Climate Change Act was passed in 2008. Although measures to deliver a cleaner, low-carbon electricity system added around £9 a month to the typical UK household energy bill in 2016, this was more than offset by a cut of over £20 per month due to reduced energy demand, mainly from more efficient lights and appliances.

In 2016, low carbon-policies made up around 9 percent of an annual ‘dual fuel’ household energy bill of around £1,160. The majority of the typical household bill resulted from wholesale, transmission and distribution costs which are unrelated to the Government’s low-carbon policies to meet UK carbon budgets and contribute to global efforts to tackle climate change.

The conclusions are set out in the CCC’s fourth independent assessment of the impact of carbon budgets on energy bills. The Committee found that, for households, typical ‘dual fuel’ households using gas for heating and hot water and electricity for lights and appliances paid (in real terms) £115 less per year for their energy in 2016 than in 2008 when the Climate Change Act was passed. The total bill includes a little over £100 annually to support the UK’s transition to a cleaner, more efficient energy system but also reflects lower energy demand, largely due to more efficient appliances.

“Action to deliver a cleaner, more efficient energy system is already delivering benefits for households and businesses” said Lord Deben, CCC Chairman. “UK emissions are falling – down 38% from 1990 to 2015 – while GDP has risen by almost 65 percent in the same period. Meanwhile, the typical household energy bill has fallen in real terms since 2012. The UK’s progress to reduce emissions, and its comparative advantage in important areas such as the automotive sector, offer opportunities for future growth and employment while delivering vital action to tackle climate change.”

Improvements in energy efficiency have saved the typical household around £290 per year since 2008 as demand for electricity and gas has reduced. This saving has come largely through the replacement of older products such as fridges, freezers and boilers with new, higher-standard energy efficient alternatives.

The gradual shift towards low-carbon electricity could add a further £85-120 per year to a typical bill by 2030 if further policies to meet UK climate objectives are put in place. Further improvements in energy efficiency have the potential to deliver significant savings for households in future (around £150, or more if wholesale costs continue to rise), which will more than offset the cost of shifting towards low-carbon sources of energy.

If all climate-related policy costs on businesses were passed on to consumers through higher product prices, this could have added up to 3 pence to the average £10 basket of goods and services in 2016, which could rise to about 6 pence by 2030. However, overall low-carbon policies have not had a major impact on UK competitiveness to date.

Some energy-intensive manufacturing sectors face higher costs from climate policies but those deemed most ‘at risk’ are largely compensated for those costs. The Committee has recommended that compensation for firms at risk of ‘carbon leakage’ should be predictable and reliable. Detailed analysis of specific sectors, including steel and cement, show compensation has reduced costs as a result of low-carbon policy, but other European countries put compensation mechanisms into place faster than the UK.

There is also a range of opportunities for business arising from the transition to a low-carbon economy. The UK low-carbon economy already makes up 2-3 percent of GDP and employs hundreds of thousands of people. Its direct contribution to the economy is the same as the oil, gas and coal extraction sectors put together. The low-carbon transition will create opportunities across current and new sectors of the economy.