Thursday, 17 May 2018
0
REM
Finnish company St1 has progressed to the stimulation stage in its project to build the country's first industrial scale geothermal energy plant at Otaniemi. The project is seeking to extract bedrock heat for use in district heating by drilling two boreholes to a depth of several kilometres. 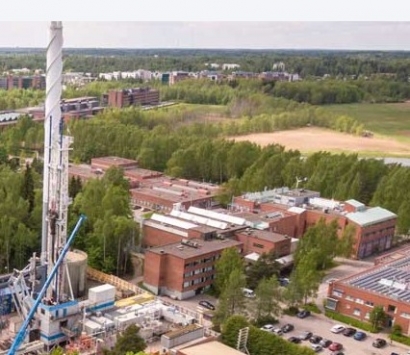 During this stage, water will be pumped down one of the boreholes for underground geothermal heating, with the resulting hot water then extracted via the other borehole. The heating plant will feed this heat into the local district heating network. The stimulation stage will study the flow of this borehole water through rock fissures at a depth of more than six kilometres underground.

St1 began drilling the boreholes for the pilot plant at Otaniemi in 2016. Air hammer technology was initially used for drilling to a depth of 4.5 kilometres. Drilling of the first borehole into the hard bedrock of Finland then continued using an optimized combination of water hammer and conventional drilling technology to reach a depth of more than 6 kilometres.

“We are now at a depth where the water temperature has proved high enough for heat generation. This allows us to proceed to the next stage, which is stimulating the borehole by feeding in water and monitoring its flow through fissures in the rock. The flow data will enable us to determine the best direction for drilling the remaining section of the other borehole and how the water can be made to flow through the bedrock between the boreholes,” said St1 Production Manager, Tero Saarno.

The flow of water pumped into the borehole through the bedrock fissures will be closely monitored. The water pressure will enlarge the fissures, with geophones detecting micro-vibrations that reveal the direction in which the water is passing through the bedrock. Several geophones have been installed, with the deepest at depths of 1.2 and 1.1 kilometres, one at a depth of 670 metres, and the rest at depths of more than 300 metres at various locations in the Helsinki Metropolitan Area.

The Institute of Seismology at the University of Helsinki is responsible for regulatory control of the project and will monitor progress using its own instruments. Surface accelerometers installed in the immediate vicinity will also measure the impact of the micro-vibrations at ground level. The ground level effects of stimulation in bedrock at depths of several kilometres are nevertheless minimal or non-existent. For example, the blasting stages of metro tunnelling cause much larger vibrations.

The stimulation stage will take about one month to complete, and will be followed by an analysis of water flows in the bedrock. This analysis stage could take up to nine  months, with further development of drilling technology occurring during the pause in drilling operations. The drilling rig will be dismantled and removed from the site when this intermission begins.

The plant has been designed to generate ten per cent of the district heating requirement for the City of Espoo. A successful pilot project may lead to deployment of corresponding technology elsewhere in Finland.