Iceland and China to Cooperate on Geothermal Research and Training

Friday, 13 April 2018
0
REM
Iceland GeoSurvey and the China Geological Survey have signed a memorandum of understanding in the field of geoscience, with a specific emphasis on geothermal energy. The agreement sets the basis for cooperation on networking, training and general collaboration on geothermal energy. 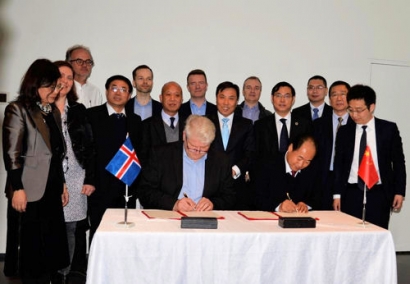 The memorandum was signed by Bjarni Richter, Head of Geothermal Energy at ÍSOR and Wang Yan Deputy, Deputy Chief Director of CGS. With the agreement both parties aim to increase links between professionals, training and other collaborations in general.

China is one of the world’s most populous countries, probably with the largest geological organization. CGS employs around 6,000 people. China’s energy consumption has largely been linked to fossil fuels, and expectations are high on the utilization of renewable energy sources. There has been a major boom in the utilization of geothermal energy for house heating in China, and the country is now the largest when it comes to geothermal district heating based people served. This has been achieved, among others with the help of Icelanders. The Icelandic company Arctic Green Energy has over the past few years, in cooperation with the Chinese oil giant Sinopec, developed several geothermal district heating systems in various cities of China.

With this agreement, ÍSOR hopes a first step is made towards the successful cooperation with the Chinese Geological Survey. So far, ÍSOR has participated in a number of projects in China and participated in training about 87 Chinese experts through the Geothermal Training Program in Iceland.