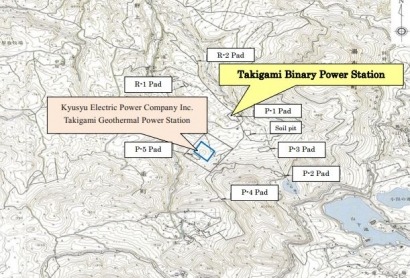 Boosting its supply in June 2010 in response to an increase in Kyushu Electric’s output to 27,500 kW, has helped the company to maintain one of the highest utilization factors of facilities in Japan.

Idemitsu Kosan decided to construct a binary geothermal power plant on the site with a view to utilizing hot water before reinjection.

Binary geothermal power generation is a method of electricity generation that uses two fluids, water as the heat source and another medium with a low boiling point; that is why the method includes the word“binary” in its name.

This method of power generation enables the use of low temperature geothermal fluid than is traditionally used to produce electricity.

Idemitsu Kosan will expand its supply of electricity produced from domestic, clean and renewable sources such as geothermal heat, thereby contributing to Japan’s energy security through the diversification of energy sources.