Thursday, 18 January 2018
0
REM
The Geothermal Development Company of Kenya has said the ground-breaking ceremony for the first of the three power plants to be constructed by Independent Power Producers at the Menengai Geothermal Project is set to be held in March this year. 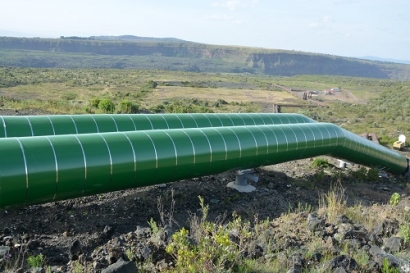 This will be a key milestone for GDC as the government of Kenya recently reiterated its support for Menengai.

Speaking recently during the Annual Staff Review Meeting in Nairobi, GDC Managing Director & CEO Eng. Johnson P. Ole Nchoe, assured staff that with accelerated project timelines and delivery, he is confident that by March 2018, the first IPP will hit the ground.

“Both IPPs have already received their Letters of Support and we trust that we will have banks on board to provide Letters of Credit. In addition, our steam gathering system is 90% complete and by March all should be done,” he said.

They will be required to tap and supply power to the national grid from the Menengai Geothermal Project.

The companies plan to invest $210 million in the construction of the power plants. The project is expected to give 500,000 households and 300,000 businesses access to low-cost power under the Government’s 5,000MW initiative.

Kenya Electricity Transmission Company Ltd (Ketraco) has already set up a 132kV substation that will transmit 105 MW of power from the power plants.

Under the arrangement – christened The Menengai Model by the African Development Bank (AfDB) - GDC takes care of upfront risks, and then invites private sector players to construct, own and operate the plants.

Photo: Cladded for perfection…Gigantic steam gathering pipes at the Menengai Geothermal Project. One of the Independent Power Producers is set for a major ground-breaking exercise.(GDC)