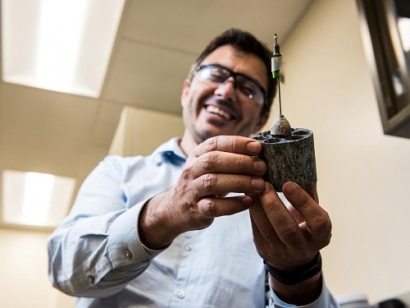 Chemist Carlos Fernandez and his team in collaboration with Simerjeet Gill of Brookhaven National Laboratory, detail the polymer’s healing properties and how it can improve the mechanical performance of cement in paper, Insights into the physical and chemical properties of a cement-polymer composite developed for geothermal wellbore applications in Cement and Concrete Composites.

Funding for the research was provided by the Department of Energy’s Geothermal Technologies Office.

The objective of the team’s paper was to see how its self-healing cement would hold up when tested against conventional cement in extreme heat conditions. Through a variety of tests, performed at PNNL and BNL’s National Synchroton Light Source II, the team found that the self-healing cement technology could eliminate the need to remove, repair and replace cracked cement wells.

PNNL researchers tested their self-healing cement’s strength and reactions to mechanical stress and conducted analyses of surface area, chemical composition, and surface topography. The tests confirmed that the self-healing cement is a significant alternative to conventional cement because it is flexible and autonomously heals cracks.

Cement is the second largest consumable in the world behind water.  Thus, finding a way to make cement even more effective could be a game changer not only for the geothermal industry, but the construction industry overall.

“The idea in a few years would be to extend it to everything,” Fernandez said. “The sky’s the limit.”

The cement industry earns more than $37 billion annually. However, cracking cement averages $12 billion a year to repair infrastructure alone. The polymer-cement combination could amount to $3.4 billion a year in savings for infrastructure like dams, nuclear waste facilities and skyscrapers, Fernandez predicts. This could mean fewer road closures and maintenance repairs that clog roads and create inconveniences for daily commutes.

The self-healing cement also could be used at hydropower dams where cracks in the structures and mechanical failure could result in flooding or contamination. Costly annual and biannual inspections and repairs could decrease in number, Fernandez pointed out. The flexible nature of the self-healing cement also allows it to withstand greater mechanical stress from natural disasters and extreme weather conditions such as earthquake tremors or high winds.

Self-healing cement could resolve major concerns about the sealing of wellbores for geothermal heat production. Leaks in wellbores cause contamination and limit the ability to provide clean energy alternatives. These leaks contaminate aquifers and surface waters.

Other self-healing polymer-cement blends developed for the oil and gas industry often have poor mechanical properties and cannot withstand the high-temperature environments found in geothermal wells.

“The development of a self-healing polymer-cement combination which is functional in geothermal environments could represent a game-changing technology towards the growth of the geothermal energy industry,” the team reported in the paper.

There are large geothermal energy reserves across the country and around the world that are not in use because wellbore cement fails in high temperature conditions and in chemically corrosive environments. With improvements like self-healing cement, geothermal energy has the potential to be an applicable, sustainable energy source. The self-healing cement can deliver significant energy with minimal carbon release to the atmosphere.

Additionally, tens of thousands of tons of conventional cement ends up in landfills, Fernandez said. With the extension of more than 30 years of additional usage of the composite, less cement would go to landfills.

Work by PNNL researchers was performed at EMSL, the Environmental Molecular Sciences Laboratory, a DOE Office of Science user facility located at PNNL, and at Brookhaven National Laboratory in Upton, New York.