University spinoff does geothermal with a carbon sequestration twist

Tuesday, 15 May 2012
0
REM
The University of Minnesota is the US has launched a startup it says will provide renewable energy more economically than existing technologies by using sequestered CO2 rather than water to extract heat from geothermal wells. 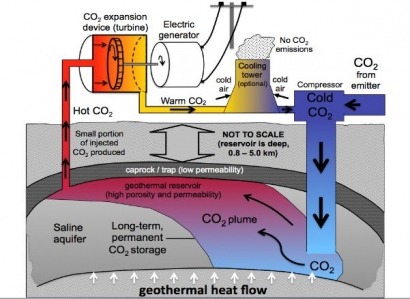 Heat Mining Company LLC, said in a written statement that the use of sequestered carbon dioxide will allow electricity to be provided from many more sites than would be possible with conventional water-based systems and does it more economically.

“This technology sits at the convergence of two conflicting demands in our society: the need to burn fossil fuels for the foreseeable future and the desire to reduce carbon emissions,” Carpenter said.

CO2 Plume GeothermalTM (CPGTM) technology is an attractive solution for conventional fossil-fueled power plants, as it prevents emitted CO2, an environmental liability in the atmosphere, from being released to the air and uses it instead as the underground working fluid to extract geothermal heat for additional electricity production and/or district heating.

In the process, the CO2 is permanently stored underground, resulting in a geothermal power plant with not only a neutral, but even a negative carbon footprint. The geothermal power facility can produce base-load power or provide peak-load power and thus also serve as a type of high-efficiency back-up “battery” for only intermittently available wind or solar power.

“This technology has the potential to introduce a new era of electrical power production from renewable wind, solar, and geothermal energy as well as from traditional fossil fuels, while significantly reducing emissions of carbon dioxide to the atmosphere,” said Martin Saar, co-inventor and earth sciences professor in the university's College of Science and Engineering.

The University of Minnesota submitted the technology for patents in March 2009 and licensed it exclusively, worldwide to Heat Mining Company LLC through the Office for Technology Commercialization. The approach was invented by Saar, Postdoctoral Fellow Jimmy Randolph, and Mechanical Engineering Professor Thomas Kuehn.

Carbon capture and geologic CO2 sequestration is a fairly new solution for preventing CO2 emissions at fossil-fueled power plants. A typical coal-burning power plant produces between 3.5 and 5 million tons of CO2 per year, and it’s possible to retrofit existing plants, and design new plants, that capture the CO2 and sequester it underground.

With a CPGTM system tapping into the underground CO2 and using it as a heat extraction fluid, power produced from earth's underground heat can be used for CO2 injection pumps while revenue from additional geothermal electricity sales can offset the very high costs of capturing the CO2 in the fossil-fueled power plant.

In addition to producing renewable energy and preventing emissions, CPG could someday provide large scale storage of solar and wind energy. The technology could also supply power for enhanced oil recovery projects that produce oil from fields that have nearly reached the end of their productive lives.

The CPG method has been demonstrated in computer simulations and details have been investigated in laboratory experiments. The next step is to build a pilot plant to test it in the field.

Saar's research leading to the new technology was originally funded by the Initiative for Renewable Energy and the Environment (IREE), a signature program of the University of Minnesota’s Institute on the Environment (IonE).

The initial research resulted in a significant federal grant from the U.S. Department of Energy as part of the American Recovery and Reinvestment Act (ARRA).