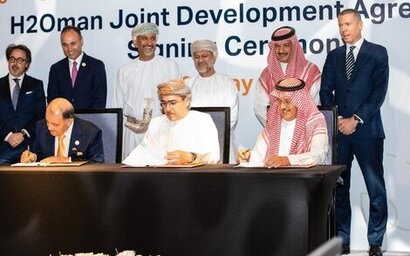 The JDA signing follows a memorandum of understanding signed in December 2021.

Envisioned for Oman's Salalah Free Zone, the joint venture project would be based on proven, world-class technology and include: the innovative integration of renewable power from solar, wind and storage; production of hydrogen by electrolysis; production of nitrogen by air separation; and production of green ammonia.

It is anticipated that the green hydrogen-based ammonia production facility would be equally owned by the project partners.

“We are delighted and honoured to work with the government of Oman to develop this multibillion-dollar project, which would be similar to the world-scale green hydrogen project we are implementing with our partners in NEOM in the Kingdom of Saudi Arabia” said Air Products Chairman, President and Chief Executive Officer Seifi Ghasemi. “We look forward to applying our know-how, technology and more than 60 years of experience in hydrogen to help move this project forward and take another significant step in decarbonising the world.”

OQ Chairman Mulham Al Jarf added that the project positions OQ as an energy transition enabler, while playing on the company’s strengths and leveraging its expertise in the downstream chemicals business, particularly in Salalah where it has extensive operations, and its ability to off-take products and competitively deliver them to global customers. The project also fits well with the Sultanates’ renewable energy strategy and fosters investments in alternative energy resources, both of which contribute to Oman Vision 2040.