Monday, 24 January 2022
0
REM
Renewables firm Dulas has been awarded funding by the Welsh Government’s Smart Living HyBRID* SBRI to undertake a project which will look at the feasibility of hydrogen production in Wales using renewable energy sources. 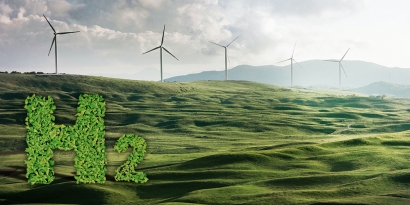 The project, called HyFEAS, will include examining the available technologies and assessing the technical and commercial feasibility of hydrogen production at Welsh Water’s Llyn Celyn hydro power plant and at a wind farm. The HyFEAS project is expected to take 4 months and Dulas hopes to use the results to progress to a full system design and planning stage.

Hydrogen in the renewable energy mix

Hydrogen is expected to be a major component of the renewable energy mix in the future and demand is anticipated to increase dramatically. Although hydrogen is already widely used on an industrial scale, it is mostly hydrogen that is generated using fossil fuels which has a huge carbon footprint. Green hydrogen has significantly lower carbon emissions. However, further research is needed to scale up technologies and bring down costs to allow green hydrogen to become widely used and this is what Dulas will explore in their HyFEAS project.

Andy Skipton Carter, Commercial Lead for Consulting at Dulas, comments,“Research into green hydrogen production and defining affordable, sustainable systems that will work with renewable energy locally and at scale is ground-breaking stuff and we are excited to have started on this project. We’ll be building on our existing skills and learning new ones so that we can continue to offer our clients pioneering, effective renewable solutions that will help combat climate change and support local energy security.”

Hydrogen is very versatile and can be compressed, stored and transported for later use. A significant number of renewable energy power plants are already operational in Wales and many more are planned. All of these are able to produce very competitively priced electricity, which immediately makes the prospect of producing hydrogen more affordable.

If locally produced hydrogen were available, haulers, train operators and construction companies could easily deploy hydrogen powered trucks, trains and equipment in Wales. The Welsh Government also hopes that by developing the hydrogen energy sector, Wales will attract the new zero-emission automotive industries which would lead to jobs and further investment. Realising the potential of hydrogen could be an exciting and transformative opportunity for Wales.