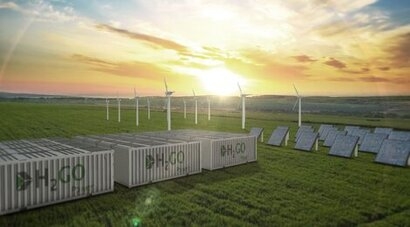 During the system’s lifetime, H2GO’s smart hydrogen storage system could remove over 225,000 gallons of diesel over its 30 year lifetime, along with the resulting carbon dioxide (CO2) emissions. The diesel is used by residents for home heat and power.

H2GO’s autonomous system, integrated with artificial intelligence (AI), stores and dispenses hydrogen in solid-state materials offering potential savings of up to 55 percent compared to compressing and storing hydrogen at high pressures. It's expected that the H2GO’s solution could deliver a targeted levelised cost of hydrogen conversion and storage at $0.25 per kg by 2028.

“The UK is truly leading the world in hydrogen innovation thanks to the exciting efforts of companies like H2GO Power” said Energy Minister Greg Hands. “The government support which they have received today will help to boost the development of hydrogen as the clean, affordable, homegrown super-fuel of the future.”

The project aims to demonstrate the effectiveness of using green hydrogen for utility-scale storage on the island and showcase commercial use cases such as hydrogen refuelling stations, industrial heat, and power and hydrogen blending into gas networks. H2GO Power also envisions technology suitability for long-duration energy storage for power and grid stability applications as those markets develop in the medium-term. The project expects to generate 100 additional jobs by 2026 through H2GO Power and 50 more jobs across the other partners. Additionally, 211 indirect jobs will be created in the supply chain, increasing the financial impact of the SHyLO demonstration project and strengthening the local economy.

“This deployment showcases how utilising low-pressure, green hydrogen generated by wind and tidal energy can deliver higher efficiency and lower costs at scale while allowing island residents to depend more on cleaner grid power than their diesel generators” added Dr. Enass Abo-Hamed, CEO of H2GO Power. “This project has the potential to power up to 70 homes and lower the levelised cost of hydrogen to make the energy competitive with natural gas. Both short-term with the global energy crisis and long-term in the face of climate change, moving away from fossil fuels is in everyone's priority. At scale, it’s technologies like ours that tick all the boxes of government decarbonisation targets, from economics to security and reliability.”

The Orkney Islands have the highest concentration of small and micro wind turbines in the UK, including larger community-owned and commercial turbines and farms. And with a lack of connection to the UK’s primary utility grid, the islands are an ideal location for H2GO’s technology. Wind-generated electricity will power water electrolysis to produce hydrogen onsite, stored in H2GO’s proprietary storage technology, and used as a reliable green energy source.

“Not only does our solution reduce dependence on fossil fuels, but it also achieves energy security and cost savings and makes green hydrogen deployment safer, reliable, and sustainable” said Rishav Bhattacharyya, Chief Commercial and Investment Officer of H2GO Power. “Through this project, we look forward to demonstrating how our hardware and software can be used in applications such as Industrial Heat and Power, Gas Blending, and Long-Duration Energy Storage, delivering a superior value proposition to our customers. We deeply value our collaboration with BEIS and the consortium partners in this endeavour and count on the support from our future stakeholders and investment partners to scale our business at a pace that matches the demand in the market and the dire need to decarbonise.”

The deployment also falls in line with the Clean Energy for Islands Initiative, which supports the development of energy resilience and sustainable growth for Europe's 2,400 surrounding islands. By deploying H2GO’s technology throughout these islands, the renewable energy industry could experience tremendous market growth, and residents would experience increased grid resiliency and reliability. In addition, the technology will deliver further independence from fossil fuels and accelerate the displacement of carbon emissions.

Beyond its unique ability to store hydrogen in a solid-state using heat instead of compression, H2GO's patented solution is modular and flexible, allowing the product to be right-sized for various locations, especially those limited in space. The company has manufactured, tested, and certified the proprietary design to meet current pressure vessel standards. In addition, because the technology is pliable, it can be deployed in commercial settings of any size and help green hydrogen projects achieve optimal efficiency.

Combined with the HyAI product platform, the H2GO system can unlock the lowest levelised cost of energy (LCOE). The artificial intelligence (AI) software conducts feasibility studies, collects data, manages assets live, and tracks the hydrogen molecule journey to ensure the energy is economical and determines the best time for the stored hydrogen to be utilised.

“This demonstration showcases our ability to deploy proprietary hardware and software solutions into a commercial hydrogen project” explained Luke Sperrin, CTO and co-founder of H2GO Power. “Using intelligent optimisation software, we quicken the communication during the production process and ultimately deliver hydrogen faster and more efficiently. This, in addition to our hardware platform, makes H2GO a practical and financially viable solution for green hydrogen to be used at scale.”

Earlier this year, H2GO Power announced a separate deployment of its AI and hydrogen storage technology, funded by the Sustainable Innovation Fund, with EMEC and Imperial College London to trial the use. In 2021, H2GO Power raised nearly $13.6 million from private investors and public funding institutions to assist with scaling R&D, product development, and execution of pilot projects.