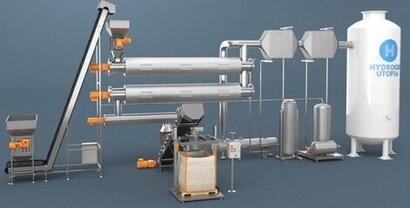 Hydrogen Utopia International PLC (HUI), a company pioneering non-recyclable waste plastics to hydrogen technology, is delighted to announce that it has signed a letter of intent (LOI) with Mitsubishi Heavy Industries Ltd (Mitsubishi) whereby Mitsubishi will review the technology and explore the commercial opportunities for developing waste plastic to hydrogen facilities, incorporating Powerhouse Energy’s Distributed Modular Generation (DMG) technology, in Japan. DMG technology can transform plastics that could otherwise contaminate the environment into increasingly sought after road fuel quality hydrogen for use in diverse applications, in the race to meet Net Zero targets. Mitsubishi will have a period of one year to review the technology under the LOI, unless extended by mutual consent. Any decision to deploy the technology would be subject to further detailed agreement(s) between the parties.

Japan is a highly industrialised country with a severe lack of hydrocarbon resources that sees multiple values in using hydrogen, including energy security, industrial competitiveness, and carbon emissions reduction. In 2017, Japan issued the Basic Hydrogen Strategy, becoming the first country to adopt a national hydrogen framework. Japan intends using hydrogen for transportation, domestic and commercial power generation, heavy industry, and potentially refining. It is already a world leader in fuel cell technology, especially fuel cell vehicles (FCVs), and its captains of industry are keen to export their technology to the rest of the world. The country is highly focused on securing access to hydrogen feedstocks. It has therefore begun to test various options for sourcing hydrogen. The Japanese government provides robust funding for research, development, demonstration, and deployment (RDD&D).

Mitsubishi is one of the ‘Big Six’ keiretsu companies in Japan – a keiretsu is a Japanese term referring to a set of companies with interlocking business relationships and shareholdings. Mitsubishi is the driving force behind perhaps the most significant, renowned keiretsu, with the bank of Tokyo-Mitsubishi sitting at the top, and each of the core companies of the keiretsu group bearing the Mitsubishi name. Together, they cooperate to distribute goods all over the globe, signing contracts with partners and suppliers to further mutual aims. The key to successful keiretsu-like partnerships is mutual support, cooperation, and trust. Hydrogen Utopia admires and respects the way that the keiretsu conduct business and looks forward to upholding such values in their dealings in Japan and beyond.

Hydrogen Utopia adheres to the adage: ‘Time and tide wait for no man’. When it comes to plastic pollution of the Earth and oceans, coupled with the pressing need for decarbonisation, procrastination is no longer an option. Despite its relative youth (the company was incorporated in 2020) HUI has already proved itself highly effective in forging strong alliances and collaborations around the Globe, in record time. This includes agreements in place with gas giant Linde GMBH, and prestigious consultant engineering firm Sweco Group, with Mitsubishi’s interest and recognition another welcome coup. Its close knit, expert, dynamic and forward looking management team and strategic partners will continue to act swiftly in terms of site identification, navigation and following of local planning and environmental regulations, plant construction, maximising of public funding and grants for its international projects.

Alexandra Binkowska, HUI’s CEO, has the energy and vision to lead the company from Europe where its flagship plant will be located, into Asia, supported by her business development team including consultant BDM Anna Mariya Yordanova, active in Japan and Korea. Anna Mariya has been on the ground in Japan since HUI’s inception and identified synergies between HUI and Mitsubishi Heavy Industries, leading to the current understanding, and the beginning of an exciting journey for all parties. With gate fees in Japan for the tipping of plastic waste running high, and a national commitment to diverging away from fossil fuels, switching to renewables and a Hydrogen powered economy, there’s huge hope on the horizon for HUI’s progressive waste to energy grand plan to take root on this mystical, powerful North West Pacific island known as the Land of the Rising Sun.

“Mitsubishi Heavy Industries has led the development of environmentally friendly technology in Japan for the last 40 years, helping to move towards a carbon neutral world” said Aleksandra Binkowska, CEO of HUI. “We are privileged and honoured to have entered into this agreement with Mitsubishi, which we are very hopeful will lead to a roll-out of HUI facilities across Japan…I would particularly like to thank Anna-Mariya Yordanova for her relentless hard work to help deploy this cutting edge technology in Japan, an industrially dominant nation of foresight that sees what a crucial role DMG could play”.