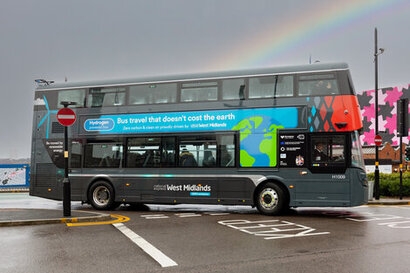 The new buses have been purchased as part of the Council’s Clean Air Hydrogen Bus Pilot, which is taking a leading role in the zero-emissions logistics market, and are manufactured by Northern Ireland company Wrightbus. Hydrogen buses only produce pure water vapour from their tailpipes - no exhaust, no fumes.

These 20 hydrogen buses will save 631kg of poisonous NOx emissions per year and will also prevent 1,560 tonnes of carbon from going out into the atmosphere. They can run for 300 kilometres on a single tank and can be fully refuelled in 7-10 minutes.

Drivers have to be specially trained to drive hydrogen buses because they behave differently to combustion engine-driven buses. Bus drivers learn to preserve the fuel cell charge for as long as possible to extend how far the vehicle can go before needing refuelling.

Managing Director of National Express West Midlands, David Bradford, added that the West Midlands already has the cheapest bus fares in England - just £4 via contactless for a daysaver; and that the region is now operating the very greenest buses, emitting just water droplets from the exhaust pipe.

“It’s a great deal for our customers - just by getting the bus, they’re saving money and saving the planet” said Mr Bradford. “These state-of-the-art buses are a sign of our commitment to sustainability. National Express bought our last diesel bus in 2019, and our goal is that the whole fleet will be zero-emission by 2030. So we're working with Transport for West Midlands to get hundreds more electric and hydrogen buses on routes across Birmingham, Solihull and the Black Country.”

Birmingham’s Clean Air Hydrogen Bus Pilot will be the catalyst for the next generation of hydrogen buses, hydrogen production and re-fuelling infrastructure development.

The council are also collaborating with ITM, who are producing and dispensing the hydrogen fuel from the new re-fuelling hub at Tyseley Energy Park.