Steelmaking presents one of the greatest opportunities for renewable energy, says Rethink

Friday, 25 June 2021
0
Robin Whitlock
One of the world’s dirtiest industries – steelmaking – will present one of the greatest opportunities for global renewable energy, according to a new report by Rethink Technology Research. 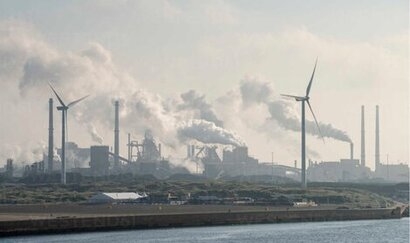 In the wake of a 1,000-year coal legacy, a combination of hydrogen and scrap-based production will see a 20-fold increase in the sector’s demand for clean power, while driving it towards net zero emissions by 2050.

The new report, entitled “Renewables set to unlock $2.2 trillion Green Steel Monster”, outlines how, fuelled by the development of emerging economies, the global steel industry will not witness the same peak in demand as coal, oil, and gas within the first half of the century, and will rise by more than 50 percent through to 2050.

The steelmaking industry currently accounts for around 7 percent of global emissions. Without change, it would, by 2050, burn through more than 60 percent of the remaining carbon budget to keep climate change from surpassing 1.5 degrees Celsius.

However, with soaring margins amid rampant infrastructure spending in the wake of Covid-19, the industry is now better placed that ever to invest in processes to manufacture a new generation of ‘Green Steel.’

The world’s five largest steelmakers have already pledged themselves to reaching net zero emissions by 2050, and simply have no other choice but to transition to decarbonised production – especially as industrial consumers, starting with the automotive sector, start to demand carbon-neutral materials in their supply chain.

“As we’ve seen in industries from power generation to automotives, the mantra of ‘grow or die’ has fast been replaced by a ‘change or die’ alternative, with those resisting a transition to net-zero facing dismal stock market performance” said Senior Analyst, Harry Morgan, lead author of the report. “The moment a clean and economically viable technology emerges to transform any industry, the need to become a fast adopter is imminent. With snowballing momentum, decarbonised steel production will become the new normal much faster than expected, leaving those that are unable to transition their operations on the scrap heap.”

On average, humans consume more than five-times as much steel per year than meat. From washing machines to aircraft, 1,829 million tons of crude steel were used in 2020. This was produced through processes that pump out obscene volumes of CO2 into the atmosphere – for the most part using blast furnaces and basic oxygen furnaces. For every ton of steel that is produced, on average 1.8 tons of CO2 are released in tandem.

Rethink Energy’s report details how the emergence of hydrogen-based methods of primary production in the late 2020s will drive an 82 percent reduction in emissions between 1990 and 2050. Despite the ongoing debate between those for hydrogen or biofuel-plus-CCUS for the decarbonisation of steelmaking, the issues plaguing the latter with regard to capture rates and excessive land use, will likely prove insurmountable. Technologies that have continued to fail in actually capturing CO2 output will be displaced by those that avoid them entirely.

Off the back of early pilot projects in China, Sweden and Germany, which will be completed in 2024, a hydrogen-based approach to the direct reduction of iron (DRI), along with the use of electric arc furnaces (EAFs), provides the potential to provide a fully ‘fossil-free’ process of steelmaking.

As an appropriate alternative for a reduced-emission process, hydrogen-ready facilities using natural gas will become popular in decarbonisation roadmaps and will be installed throughout the 2020s, before green hydrogen can displace fossil fuels entirely over the subsequent decades. Green hydrogen projects will most likely reach commercial status in 2029.

This won’t just happen by magic, but transition towards green steel opens huge opportunities for those operating both upstream and downstream of the world’s steelmakers. For the hydrogen-based DRI process to be truly carbon neutral, 61 million tons of ‘green’ hydrogen will have to be produced through over 500 GW of full-time electrolysis. This – along with the 255 percent increase in electricity demand for EAFs by 2050 – will have to be powered by renewable generation to the tune of 4,500 TWh per year – more than 70 percent of power generated by wind, solar and hydropower in 2020.